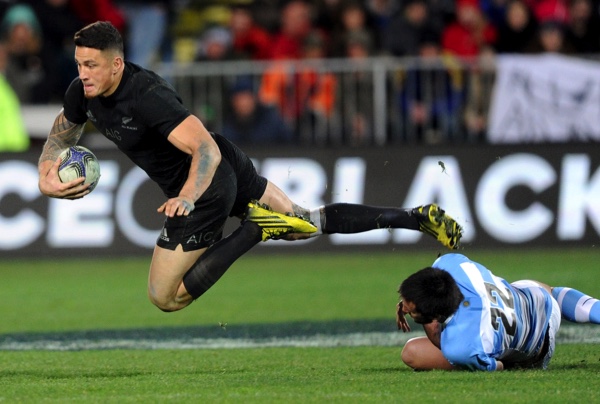 Sonny Bill Williams is going in for a try untouched in the left corner when the whistle blows.
He immediately turns, drops to the grass, and presents the ball, which is whisked away to the right.
“Come on Sonny, get back in line,” Gordon Tietjens yells.
Williams is back in line right away.
New Zealand’s rugby sevens coach, who will pick his Olympic squad in July, doesn’t stand for slackers or egos.
What Tietjens wants is 100 percent effort, even in training. “And even if you’ve only got 50 percent left to give,” says Cory Jane, the All Blacks wing who played under Tietjens for three years, “he’ll demand you give 100 percent of that 50 percent.”
Titch, as he’s been known for as long as he’s been involved in rugby, tends to get what he wants.
The mere length of his tenure – 22 years and counting – is extraordinary, even before considering his incredible record of success. Consider, he’s the only remaining active international coach from the amateur era. His immediate success in winning Hong Kong, sevens’ biggest prize, from 1994-96, with Jonah Lomu rampant, led World Rugby to create the sevens world series.
In the 17-year history of the series, Tietjens’ teams have won 12 of them, including the first six. There’s also two Rugby World Cup Sevens titles, and four Commonwealth Games gold medals.
After he won his 10th world series in 2012, the Rugby Hall of Fame waived its rule that inductees must be retired for three years, and decided his achievements were too outstanding to be disregarded. At the induction, then-World Rugby chairman Bernard Lapasset said rugby’s upcoming return to the Olympics was “in no small way down to Gordon Tietjens. Through his knowledge, passion, and expertise, he has driven the standards towards what we now celebrate as a truly global game of sevens.”

In 2013, New Zealand was no longer content with praising him, and knighted him. Arise Sir Gordon. But, no, he insisted on still being called Titch.
His humility intact, so has been his drive and competitiveness. Time has not softened him.
New to the team and sevens this season in a bid to burnish a CV including two Rugby World Cup gold medals, a Super Rugby title, NRL title, and New Zealand heavyweight boxing championship with an Olympic gold, Williams said he’d never come across a harder training program than Tietjens’.
The coach’s boot camps are folklore. The great Eric Rush, 15 years a sevens international, 11 of them under Tietjens, remembers the latter’s very first session in 1994: “He pretty much broke everybody.” One of Tietjens’ ploys was a nonstop game of touch with changing rules. Rush called it “Death.” Dallas Seymour, who played eight of his 14 years in the team under Tietjens, recalls the longest session was six hours. Lomu described the trainings as “ruthless.”
There is method to the madness. Tietjens is after characters who not only can play, but have heart, and the wherewithal to think clearly when the lungs are gasping, the muscles are burning, and time is nearly up. Forged in a crucible of sweat and pain, the players come out of the boot camps with an all-for-one attitude, and believing if they can survive that, then they can endure anything.
Tietjens says he’s been lucky with the talent he’s had, and as much as he’s loved all the wins, he’s derived a lot more pride from seeing his players earn Super Rugby contracts and All Blacks spurs. So far, 44 of his players have become All Blacks.
“It’s no surprise to me that so many of Titch’s guys go on to be stars in the test arena, too,” Jane says. “Under him, you develop exceptional skills, and become accustomed to pressure, to big stadiums, and to the tournament atmosphere.”
Tietjens was in the very first New Zealand Sevens team, in 1983. Lean and lanky, he exceeded expectations by playing first-class rugby for a decade as a flanker. He coached sevens and 15s teams, and led Bay of Plenty to the 1992 title, the first and only title by a New Zealand team, in Melrose, Scotland, the home of sevens.
When he was appointed to his current job in 1994, he thought it would be a short gig. But then he won the 1998 Commonwealth Games, and thought he’d go to the next Commonwealths. He won that, too, and liked the idea of another go. He’s contracted to the end of the Olympics in Rio de Janeiro, and has said he might finish there and said he might not. Foster Niumata, London, AP