Rugby | Pressure on Japan in World Cup opener against Russia 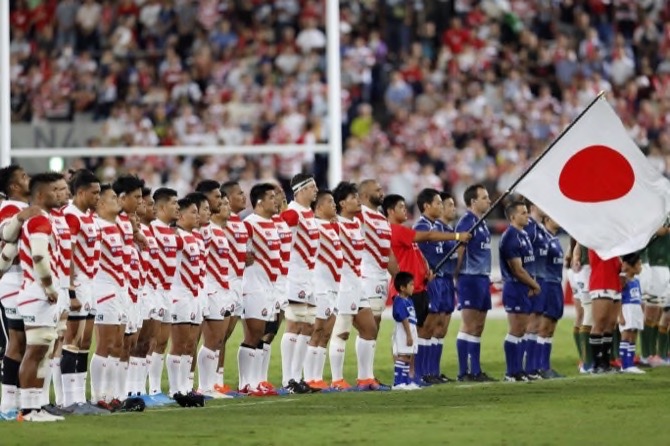 The Rugby World Cup opener has been four years in the making for Michael Leitch and his Japan squad.

The hype has been steadily growing, and now Leitch’s lineup will have its first genuine taste of the expectation which comes with being host when it plays Russia tomorrow in the opening match of the first Rugby World Cup to be held in Asia.

An upset win over South Africa at the 2015 World Cup swelled Japan’s fan-base at home and abroad and has added to the expectation that they may be the giant-killers of this year’s tournament.

Backrower Leitch was one of eight players selected yesterday in Japan’s match-day 23 who were involved in that game four years ago.

He says the atmosphere has intensified in practice, but “it’s great having all eyes on rugby.”

Yu Tamara was picked by coach Jamie Joseph to start at flyhalf and Luke Thompson was included on the bench. At 38, Thompson could become the oldest player to represent Japan in the competition and the first to play in four World Cups.

Leitch says his players are happy to live with heightened pressure and have their sights firmly set on making the quarterfinals for the first time. An emphatic win by 10th-ranked Japan over 20th-ranked Russia might help quiet the players’ nerves and those of their fans while launching the tournament on a high note.

Japan will have to be quickly into stride as it needs not only to beat Russia but to do so by a large margin if it is to have a chance of progressing to the knockout rounds. Points differential could come into play in deciding the top two teams in what seems to be an even pool.

Japan shares the group with top-ranked Ireland, Scotland, Russia and former quarterfinalist Samoa. After Russia it plays plays Ireland, then Samoa, making its last pool match against Scotland a possibly decisive contest for second place if Ireland tops the pool as expected.

“It’s going to be a big occasion, not just for our team but for the country, but you can’t really replicate what coming up for the players,” Joseph said. “Our team wants to make the top eight. The last World Cup Japan did very, very well, but still didn’t make the top eight so that’s been the target all along.”

A 41-7 loss to South Africa in a recent warmup game was not in any way indicative of Japan’s comparative standing with Tier One nations or of any decline in its ability since the last World Cup. Joseph used the match for experimentation and to adapt a game plan to those of its pool opponents.

“The biggest lesson for us is that when we make a small mistake against a Tier One team they will punish us and score points,” Joseph said. “We are a well-prepared team both physically and mentally. We understand what our roles are — We want to make everyone proud.”

One of the men under most pressure is Tamura, a bench player at the last World Cup but now has the task of guiding Japan’s attacking game.

“This is a game with 15 players,” Tamura said. “It’s the same for any country. Everyone has to do a good job and it’s difficult to deal with it all alone. The stage is all set with the home fans behind us.”

Russia may still be startled to find itself at the center of the spectacle of the World Cup’s opening match. The Russians were lucky to qualify, doing so only after Romania was disqualified for fielding ineligible players.

Russia’s warm-up form has not been impressive: it conceded 162 points including 24 tries in its last three matches. But captain Vasily Artemyev said those games allowed Russia to overcome some rustiness and promised his team would be better at the World Cup.

Artemyev and Vladimir Ostroushko are in the starting lineup after playing in all four matches in Russia’s last appearance at the World Cup in 2011. Victor Gresev is on the bench. JEROME PUGMIRE, TOKYO , AP