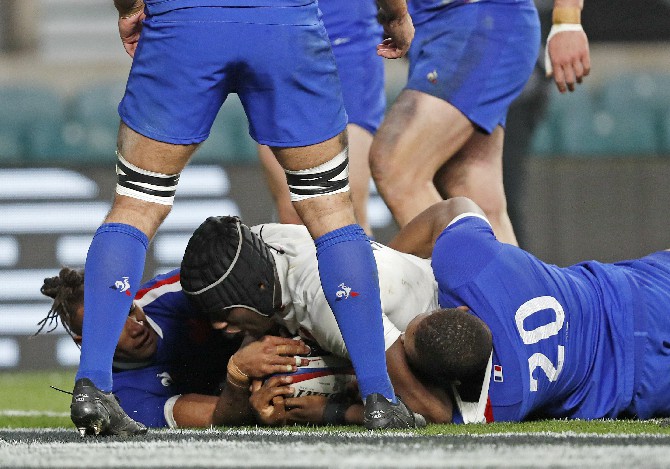 England redeemed a woeful Six Nations title defense by beating trophy favorite France 23-20 thanks to a dramatic Maro Itoje try in an empty Twickenham yesterday [Macau time].
England was heading to a third defeat in four matches until the 76th minute. A lineout drive from 10 meters out reached the tryline and Itoje dived over from a ruck. Referee Andrew Brace decided no try, believing Itoje was held up by flanker Cameron Woki and Teddy Thomas. But after a video review which showed the ball brushing the grass, Brace changed his mind.
Itoje smiled among his congratulating teammates, a match-winner again after coming into the game heavily criticized for being the poster boy of the indiscipline that has undone England’s campaign.
France’s Grand Slam bid was over, but it was still in title contention with home matches remaining against title rivals Wales, which is unbeaten, and Scotland, which has one loss. But Wales can win the championship next weekend in Paris with a draw.
“This is the type of match that makes you grow,” France captain Charles Ollivon said. “Last year in [the] Scotland [defeat] we didn’t take any points and today we’ve taken one [losing bonus point].”
Doubts about France’s form after a month out of action were dispelled within 66 seconds by a try to star scrumhalf Antoine Dupont.
But England’s response was to finally come out of its shell with its best performance since the 2019 Rugby World Cup. The attack fired up, came at pace, and England kept its composure to not concede a penalty until the 24th minute.
Winger Anthony Watson marked his 50th cap with a try and England led 13-7 after a couple of Owen Farrell penalties.
France retook the lead with a brilliant first-phase try to wing Damian Penaud to finish a luminous first half 17-13 ahead.
The second half was cagey as France struggled to get out of its half while the stubborn English conceded errors. An exchange of penalties to the 54th minute maintained the tension as France looked set to win a Six Nations match at Twickenham for the first time since 2005.
Even after Itoje’s try, France had a final fling to England’s 22 only for the surge to die when Dupont knocked on behind a ruck.
England coach Eddie Jones said of France: “They haven’t had a game for a while and they were fresh. We had to be with them at halftime — that was our big job.
“We thought we would get them in the second half and we did.”
France made a sensational start when a Thomas chip was collected by Dupont for a try.
The surprises continued as England coolly strung 18 phases together until flanker Mark Wilson was held up between the posts by center Gael Fickou. Another nine phases later, center Henry Slade sliced up the middle and George Ford’s vision gave Watson his try.
A second Farrell penalty had England up 13-7 and back threatening the French tryline. But Dupont forced a knock-on by opposite Ben Youngs to relieve.
The last 10 minutes were the Mathieu Jalibert show. Picked ahead of the fit-again Romain Ntamack, the playmaker slotted a penalty and was involved in three try chances. Only one came off but it was brilliant.
Fickou grabbed a long lineout throw on the England 22, Jalibert looped around, drew the defense and lobbed to Penaud to score untouched. Jalibert’s second sideline conversion made it 17-13 which they couldn’t add to before halftime.
The second half didn’t live up to the first as errors mounted.
They can’t afford to back off against Wales next weekend. MDT/AP