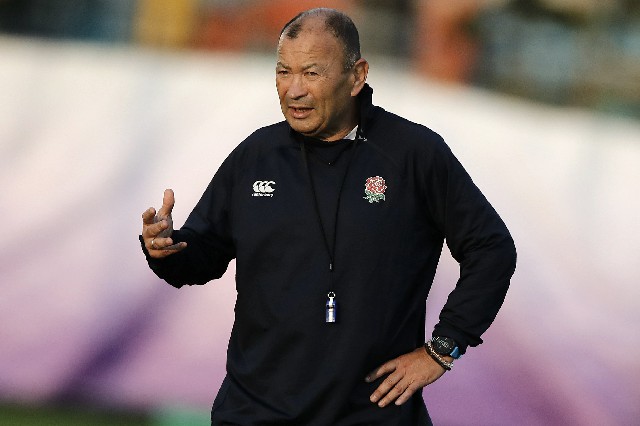 There’s a reason Steve Hansen is comfortable calling Eddie Jones’ bluff. From a place called Bluff in the deepest south to Cape Reinga in the far north, Hansen can genuinely say the men wearing All Blacks jerseys at the Rugby World Cup have the full backing of their nation.
Rugby is more of an obsession than a game in the volcanic islands of New Zealand, from where the All Blacks have emerged as a globally-recognizable export. It’s not the domain of the monied, it’s every Kiwi’s sport.
England has the finances to outspend any union to prepare for the World Cup, but it can’t match New Zealand’s cultural connection to its team.
Jones knows that, so he’s tried a few avenues to get under the skins of New Zealanders ahead of Saturday’s semifinal at Yokohama. He has promoted the All Blacks as the best team in the history of sport, but then suggested they could be mentally fragile under the burden of knockout pressure.
He acknowledged the nation-wide appeal of the All Blacks, then chirped about New Zealand reporters covering the World Cup being merely fans with laptops. He even tossed in a spying allegation about somebody secretly filming England’s practice, although he didn’t specifically say it was from New Zealand.
Hansen’s response has been subtle. He accepted Jones’ rating of the All Blacks as being heartfelt and clearly well considered.
“It’s a really nice statement and I wouldn’t doubt that Eddie believes that, but he is also being quite kind to us,” Hansen said. “History is history and (this game) is about creating new history. Both teams are going to go at each other on Saturday and that game won’t define either team, but it will give one team the opportunity to go through to play a final.”
He pointed to how close England got to winning their most recent meeting — before slumping to a sixth consecutive loss.
England has never beaten New Zealand at the World Cup, in 1991 and ‘99 in the group stage in the semifinals in ‘95. The overall record is New Zealand 33 wins and a draw in 41 matches. And, when asked where the Anglo-Kiwi match stood in the pantheon of rugby rivalries, Hansen selected South Africa as New Zealand’s greatest rugby adversary, despite facing the double-headed monster of England with an antagonistic Aussie coach this weekend.
Perhaps he was thinking further ahead to his ideal final. That could happen if New Zealand beats England on Saturday and South Africa beats Wales on Sunday at Yokohama.
“I think we’ve played England once in the last six years, so it’s hard to build a rivalry when you don’t play each other,” Hansen said, implying it could be a more regular feature if the home nations really wanted it. Another little dig. “If we could get the Six Nations to come on board for a global season, we’d be able to do that. Once they do that, then they’re starting to think about the game rather than themselves.”
For the benefit of any British journalists n the room, and any fans with keyboards, he added: “There’s a headline for you.” 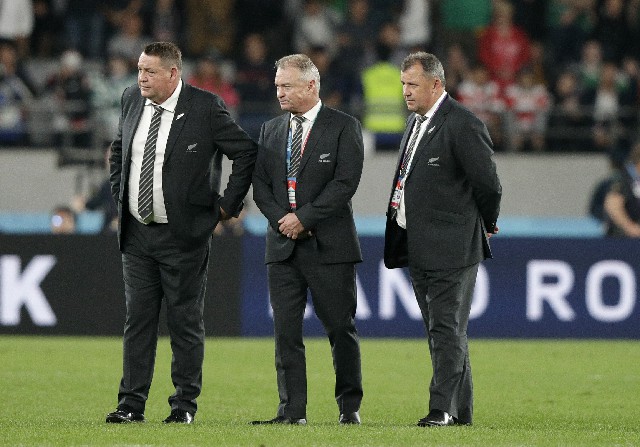 New Zealand hasn’t lost a game at the World Cup since an upset quarterfinal loss to France in 2007, adding its second title on home soil in 2011 and a third in England four years ago — when England failed to make it out of the group stage.
England has always been strong at the set-piece, particularly the scrum. Hansen said New Zealand’s forwards deserved more credit in that area.
He promoted the versatile Scott Barrett to the starting lineup to add size and bulk and another lineout option, relegating Sam Cane to the bench. It was the only change to the XV that started in the 46-14 quarterfinal win over Ireland.
Jones said the best four teams were still alive in the competition and, “We get to play one of the greatest teams ever, that are shooting for a ‘three-peat’, which has never been done, so that brings an element of pressure to their team.”
“We don’t have any pressure, mate. No one thinks we can win,” he said. “There are 120 million Japanese people out there whose second team are the All Blacks. So there’s no pressure on us, we’ve just got to have a great week, enjoy it, relax. Train hard and enjoy this great opportunity we’ve got, whereas they’ve got to be thinking about how they’re looking for their third World Cup and so that brings some pressure.”
Hansen rejected Jones’ appraisal, saying he enjoyed some of his counterpart’s one-liners but didn’t take any of the mind games seriously.
“Logic would say we shouldn’t be favorites because it’s never been done before,” Hansen said, adding that England really had more to lose considering the four-year buildup since a disappointing group-stage exit in 2015 when hosting the tournament.
“England were desperately disappointed with how they went,” Hansen said. “They’ll be under immense pressure themselves. To say they’ve got nothing to lose? Eddie doesn’t believe that, either.”
Jones was set to announce his team today, with most selection speculation around the inside backs.
After coaching Australia to the World Cup final in 2003 and being a consultant to South Africa’s winning campaign in 2007, Jones guided Japan to an unprecedented three wins in the 2015 World Cup and an epic upset over South Africa in the group stage. His wife is Japanese and his mother has Japanese heritage, so he has a good feel for the host nation. As England coach, he thinks he’s up against it this weekend.
“I’ve seen all the All Black jerseys around,” Jones said. “Even my wife, I have to tell her to stop (supporting) them.” JOHN PYE, TOKYO, AP