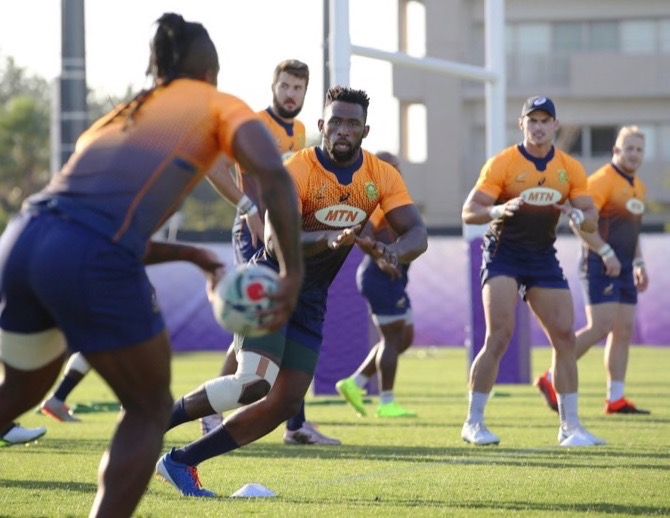 Read this Jerome Garces: The All Blacks are no longer rugby’s best.

For the second time this week, the Springboks stressed this week for the referee’s benefit that New Zealand doesn’t deserve any favors from him this weekend.

There’s been a perception for at least the last decade that the All Blacks have received, by virtue of their No. 1 status and reputation, the rub of the green when referees had to make 50-50 calls.

South Africa and New Zealand meet tomorrow in Yokohama on just the second day of the Rugby World Cup. The outcome of perhaps the biggest pool game in tournament history will set back one of the title contenders, and the Springboks have been urging Garces to be fair. With all due respect.

First, assistant coach Mzwandile Stick noted the result could go either way, and “hopefully the match officials will also respect the game.”

He added the All Blacks are favorites, “but we are on an equal level with them at the moment. We are just hoping the officials will treat all the teams equally.”

Stick’s message was reinforced at the team announcement by coach Rassie Erasmus, who recalled when he was playing for the Springboks during their 17-win streak in 1997-98 how they received more respect from everyone for how well they were doing.

“Even referees buy into that respect,” he said. “Because you’re playing so well, referees tend to almost find it tough to penalize you on 50-50 decisions.

“Because New Zealand was so long No. 1 in the world, there was a time when they had so much respect from every level, even from referees. When (New Zealand) had teams under the pump, some of the 50-50 decisions just went their way because they deserved that being No. 1 for so long.”

With the top ranking spread around recently between New Zealand, Wales, and Ireland, and this World Cup being a little more open than previously, Erasmus said, “This is a World Cup where any team can beat any team. Referees should be open-minded going into test matches.”

What Erasmus didn’t go out of his way to mention was South Africa’s poor record when Garces was controlling their tests. The Springboks have lost nine of their 13 tests that the Frenchman has refereed, one of them the defeat to Japan in the 2015 World Cup that marked the biggest upset in tournament history.

Against New Zealand when Garces has the whistle, the Springboks have lost all four tests, including the 2015 World Cup semifinal.

For the first time since that match — 51 matches ago — South Africa has stuck with an unchanged squad.

Kolisi has since returned from a knee injury. The only doubt this time involved reserve prop Trevor Nyakane, who also got over a knee injury to confirm his place, and celebrated the birth of his first child this week.

Erasmus said he had no problem selecting lock Eben Etzebeth, who is being investigated in South Africa for an alleged assault in a bar brawl, and for alleged racial abuse in a separate incident on the same night last month. Etzebeth has denied the allegations.

Erasmus said they were happy to fully cooperate with prosecutors, but nobody yet has approached the team so it hasn’t been a disruption. The coach said he’s worked with Etzebeth for the past decade.

“I know him as a person and have a good relationship with him. When he tells me something I believe him,” Erasmus said. “There’s a thorough investigation going on in South Africa, and until something comes out of that I’m going to believe what he tells me.” FOSTER NIUMATA, TOKYO, AP