Russia-North Korea | Kim upbeat as he arrives for Putin summit 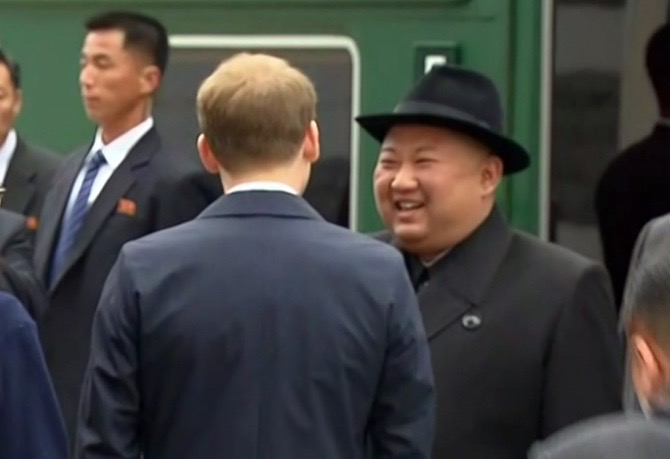 Smiling and upbeat, North Korean leader Kim Jong Un yesterday stepped off his khaki-green armored train in far-eastern Russia for a much-anticipated summit with President Vladimir Putin that comes amid deadlocked diplomacy on his nuclear program.

Kim, dressed in a black coat and a fedora, first met with Russian officials at Russia’s Khasan train station near its border with the North, before traveling on to the Pacific port city of Vladivostok for a summit with Putin today.

Speaking to Russia’s state-owned Rossiya-24, Kim said that he is hoping for a “successful and useful” visit and would like to discuss with Putin the “settlement of the situation in the Korean Peninsula” as well as bilateral ties with Russia.

Kim sat down with local officials as well as a Russian deputy foreign minister in Khasan before traveling on. It was his first visit to Russia as North Korean leader; his late father, Kim Jong Il, visited in 2011.

“I have heard a lot about your country and have long dreamt of visiting it,” Kim was quoted as saying. “It’s been seven years since I took the helm, and I’ve only just managed to visit.”

Kim evoked his father’s “great love for Russia” and said that he intends to strengthen the ties between the two countries.

Kim arrived in Vladivostok aboard his armored train early evening yesterday. He was greeted by a military orchestra before he got into his personal limousine that traveled with him, and drove away. He is expected to attend a dinner reception hosted by Russian Deputy Prime Minister Yuri Trutnev, according to South Korean media.

After his summit with Putin, Kim may tour neighboring facilities or landmarks before departing for home tomorrow. Primorye governor Oleg Kozhemyka told Rossiya-24 that Kim would be meeting “ordinary people” who all favor closer ties with the North.

Kim would also be offered traditional Russian dishes as borscht, pelmeni, or meat dumplings and caviar — though he brought his own cooks with him, Kozhemyaka added.

In February, Kim’s second summit with Trump in Hanoi ended without any agreement because of disputes over U.S.-led sanctions. There have since been no publicly known high-level contacts between the U.S. and North Korea, though both sides say they are still open to a third summit.

Kim wants the U.S. to ease the sanctions to reciprocate some partial disarmament steps he took last year. But the U.S. maintains the sanctions will stay in place until North Korea takes more significant denuclearization steps.

Some experts say Kim could try to bolster his country’s ties with Russia and China. Others say it’s not clear how big of a role Russia can play in efforts to restart the nuclear negotiations. The summit could allow Putin to try to increase his influence in regional politics and the standoff over North Korea’s nuclear program.

“Kim wants to show that he’s cooperating with Russia too, rather than looking to only the U.S. and China. But I think it’s not easy for Russia and China to provide North Korea with practical assistance that leads to the inflow of dollars,” said Chon Hyun-joon, a former senior researcher at the Korea Institute for National Unification in Seoul.

Putin’s adviser added that the Kremlin would try to help “create preconditions and a favorable atmosphere for reaching solid agreements on the problem of the Korean Peninsula.”

Ushakov pointed at a Russia-China roadmap that offered a step-by-step approach to solving the nuclear standoff and called for sanctions relief and security guarantees to Pyongyang. He noted that the North’s moratorium on nuclear tests and scaling down of U.S.-South Korean military drills helped reduce tensions and created conditions for further progress.

Ushakov said that Putin-Kim summit’s agenda will also include bilateral cooperation. Russia’s trade with North Korea is minuscule at just $34 million last year, mostly because of the international sanctions against Pyongyang.

Russia would like to gain broader access to North Korea’s mineral resources, including rare metals. Pyongyang, for its part, covets Russia’s electricity supplies and investment to modernize its dilapidated Soviet-built industrial plants, railways and other infrastructure.

A city of more than half a million, Vladivostok was in gridlock as traffic was blocked in the city center because of Kim’s visit.Iuliia Subbotovska, Hyung-Jin Kim & Kim Tong-Hyung, Vladivostok, AP

February 2018: North Korea sends hundreds of people to Pyeongchang Games in South Korea, including Kim’s sister, who conveys her brother’s desire for a summit with President Moon Jae-in.

March 27, 2018: Kim makes a surprise visit to Beijing for a meeting with Chinese President Xi Jinping in an apparent move to strengthen his leverage ahead of his negotiations with Trump.

April 21, 2018: North Korea says it has suspended nuclear and long-range missile tests and announces plans to close its nuclear test site as part of a move to shift its national focus and improve its economy. Trump tweets: “This is very good news for North Korea and the World” and “big progress!”

May 7, 2018: Kim meets Xi again in China and calls for stronger strategic cooperation between the traditional allies.

May 9, 2018: U.S. Secretary of State Mike Pompeo visits Pyongyang to prepare for the planned Trump-Kim summit. North Korea releases three Americans who had been imprisoned, and they return with Pompeo to the United States.

May 24, 2018: North Korean diplomat Choe Son Hui releases a statement referring to Vice President Mike Pence as a “political dummy” for his critical comments on the North and saying it was up to the Americans whether they would “meet us at a meeting room or encounter us at nuclear-to-nuclear showdown.” Trump announces he’s pulling out of his summit with Kim, citing the North’s “tremendous anger and open hostility.”

May 26, 2018: Kim and Moon meet at a border village in an effort to revive the summit with Trump.

June 1, 2018: After meeting North Korean envoy Kim Yong Chol at the White House, Trump says his meeting with Kim Jong Un is back on for June 12.

June 12, 2018: Trump and Kim meet in Singapore, where they repeat the first inter-Korean summit’s vague statement on the peninsula’s denuclearization without describing when and how it will occur.

June 19, 2018: Kim visits Beijing for his third meeting with Xi, who praises the “positive outcome” of the Trump-Kim meeting.

Sept. 19, 2018: Kim and Moon hold their third summit in Pyongyang and the North says it’s willing to permanently dismantle its main nuclear complex in Yongbyon if the United States takes unspecified corresponding measures.

Jan. 1, 2019: Kim in his New Year’s speech says he hopes to continue his nuclear summitry with Trump, but also that he would seek a “new way” if the United States persists with sanctions and pressure against the North.

Jan. 8, 2019: Kim visits Beijing for his fourth summit with Xi, vows to “achieve results” on the nuclear standoff in his next summit with Trump.

Feb. 8, 2019: Trump announces the Vietnamese capital, Hanoi, as the venue of his second summit with Kim.

Feb. 27-28, 2019: Trump and Kim’s second summit breaks down over what the Americans describe as excessive North Korean demands for sanctions relief in exchange for partial disarmament steps limited to the Yongbyon complex.

April 13, 2019: Kim says he is open to a third summit with Trump, but sets the year’s end as a deadline for Washington to offer mutually acceptable terms for an agreement.