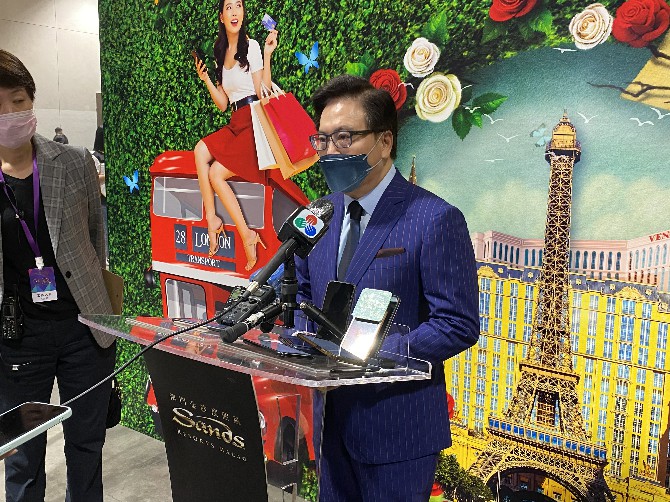 President of Sands China Ltd Wilfred Wong is expecting a further uptick in the group’s business during the summer holiday — with the average occupancy rate among all properties projected at 70% — despite an asymptomatic Covid-19 case recently reported in Zhongshan at midnight on July 22.
Wong chalked up his unfaltering faith in the peak season of the year to Zhongshan not being a typical transportation hub for the majority of mainland tourists travelling into Macau.
“Most mainland tourists usually enter Macau through the airport in Guangzhou. Hence, I believe it [the newly reported case in Zhongshan] will not have a significant impact on their travel confidence to visit Macau,” he stated.
In addition, Wong said he is certain that the swift pandemic control measures mandated by Zhongshan municipal government will keep the pandemic under check. They include requiring all residents to undergo nucleic acid tests and present proof of a negative Covid-19 test conducted within 48 hours upon leaving the city.
“Given the check-in rate over these two days, [we] do not see any obvious influence so far,” he added.
Wong is anticipating the group’s occupancy rate to reach over 70% on average, even reaching 90% during weekends, over the summer holiday.
Wong expressed his fairly positive outlook on the summer holiday to the media at The Venetian Macao, following the opening ceremony of the 2021 Sands Shopping Carnival.
Overall, Wong is upbeat about business in the second half (H2) of 2021, saying that it will fare better than the first half (H1).
“Our business performance has been on an upwards trend, with our H2 result already outshining that of H1,” he told the media.
The president also highlighted a noticeable rebound in the meetings, incentives, conferences & exhibitions (MICE) sector, which was evidenced by the large volume of bookings made by MICE travelers — 3,000-4,000 visitors at each event — in August.
However, Wong added that the extent of the improvement in H2 will largely hinge on the situation for travelers entering Macau during the season, and whether there will be a gradual relaxation in hosting crowd-gathering MICE events.
Since the government resumed the seven-day validity period for Covid-19 test results for arrivals from Guangdong province from July 10, the group has seen an “obvious increase” in occupancy rate, even on par with May’s levels.
Wong also disclosed that Londoner Court — another hotel with 370 luxury residential-style suites alongside The Londoner Hotel at The Londoner Macao — will open in full swing during the Golden Week in October. It will target high-end customers and family travelers.