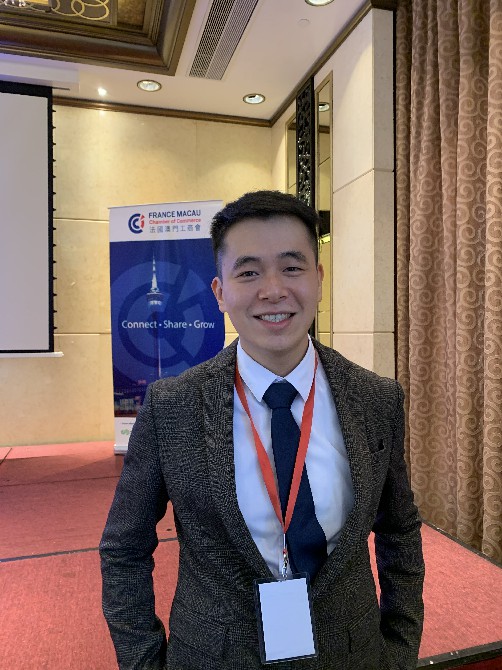 In spite of the global inclination to “normalizing” the use or execution of the metaverse concept, in which the five senses can receive virtual stimuli that compare to real stimuli, Macau’s tourism industry should not panic, but rather should prepare for a new business model.
The comment was given on the sidelines of a business breakfast event Wednesday by Peter Chang, co-founder of Golding Technology and lecturer of business of City University of Macau.
Chang had worked for the then internet giant Yahoo! in the early stage of his career. He revealed that most advertising agents working in the Silicon Valley had experiences working at Yahoo!.
During his presentation, Chang said that the information technology industry is developing the metaverse concept to the point where users may be able to sense feelings within the metaverse as if they are physically perceiving certain elements.
With continual hardware improvements expected, users in the future should expect to see, hear, smell, feel and taste the elements presented to them in the metaverse.
If so, the tourism industry of Macau might worry that nobody will physically visit any tourist sites when the metaverse truly becomes the new normal. This was actually a question raised by a participant at the event.
Chang takes an optimistic view of the question. He said that although more activities will be able to be conducted online, the yearning for physical tourism will still be there. He believes that people will still enjoy real-life experiences, even when metaversal experiences become widely attainable.
“Although people may be able to see the Ruins of St Paul’s so realistically as if they’re really standing in front of it, I believe they will still have the desire to visit the attraction in person,” Chang said. “Imagine: we’ve run online meetings for a couple of years now, do we still want to meet our friends and family who are outside of Macau?”
“Tourism is a special case,” he concluded.
Chang said that since metaversal experiences rely heavily on hardware, such as virtual-reality goggles and perception suits, prolonged periods of engagement will leave uses with pairs of exhausted eyes. “It may make them desire real-life experiences more,” he explained.
He uses the Ruins of St Paul’s as an example. “People will only be able to touch and scrutinize the rocks and stones used to build the Ruins with themselves standing right in the middle of it,” he said. “Only then can they see what marks and scratches have been left on these centuries-old materials.”
The key factor, in his opinion, is that in physical world, traces of events cannot be easily eradicated, but in the metaverse they can.
Speaking on how Macau should prepare for the era of the metaverse, Chang thinks that the city can at most be an intermediary, playing a role similar to today’s social media platforms, which help people promote our businesses or, in the case of many influencers, themselves.
In other words, Chang believes that Macau should use the technology to promote itself to the world’s population, “and trigger their desire to visit Macau using virtual or augmented realities.”

What is the metaverse?
A Google search for “metaverse” returns results like this one from Wikipedia: “The metaverse is a hypothesized iteration of the internet, supporting persistent online 3-D virtual environments through conventional personal computing, as well as virtual and augmented reality headsets.”
It seems both utterly fantastic and difficult to comprehend. However, at the breakfast event, Chang stressed that the execution or the realization of the concept is not as new or distant as many have understood.
He said that the use of virtual reality or augmented reality in video games, such as the famous FIFA, Gran Turismo and Grand Theft Auto series, are vivid and live examples of the execution, if not the experimentation, of the concept in real-life scenarios.
Although not fully a metaverse, these video gaming platforms can in fact be considered as approximating metaverses, Chang explained.
In a metaverse, users will be able to make their own avatars and interact with others, similar to what they do in real life. For the time being, senses may not be as vivid as in physical life but such obstacles may be crossed someday in the future.
Where there is life, there is consumption. It can be imagined that materials used by the avatar will not be free-of-charge. Similarly to the many cellphone and video games currently available, these avatar materials, such as clothing, will be charged for.
During his presentation, he revealed that sport equipment and lifestyle brand Nike have recently secured the world’s first virtual trademark registration. With this, online surrogates of the brand can be legally banned. More importantly, the brand can start selling metaversal products to metaversal identities.
He added that three major technology firms, namely Facebook – now Meta – Microsoft and Nvidia are developing their own metaverses. Meta shall focus on life and lifestyle experiences, Microsoft on virtual meetings and Nvidia on 3D contents.