The Education and Youth Affairs Bureau (DSEJ) director, Leong Lai, has said that local schools will conduct their student orientations on different days after being reminded by DSEJ to adopt a flexible timetable. “Sixty-one schools will start their new school year on September 1 while some other schools will start on September 2 and 3,” the director said. She added that the Bureau also hoped that schools could stagger their orientations throughout the day. The director said that some schools have kindergarten, primary and secondary sections. These schools have also decided to organize for orientations of different sections to occur at different hours. Moreover, Leong Lai believes that parents are well aware of the traffic conditions. Therefore, the traffic congestion on the first school day should not be as severe as imagined. The director still reminded parents to pay attention to the road conditions and start their commutes earlier. 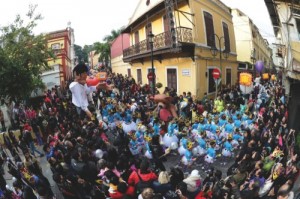 Local groups are being invited to take part in the “Parade through Macau, Latin City,” organized yearly by the Cultural Affairs Bureau (IC). Applications for this year’s event will be open until September 26. Since 2011, the parade has been held annually through the streets of the historic centre. Local and overseas associations are invited by the organizers to participate in this event, which takes place on December 20, marking the anniversary of the region’s handover to China. According to the IC, the parade has become increasingly popular and, over the past three years, “has been seen by millions of people, from participating crowds and spectators to both local and regional live television transmissions, and to viewers of special pre-recorded programmes broadcast in the region or overseas.” Performance proposals and all the related information must be submitted to IC’s Cultural Events Department.