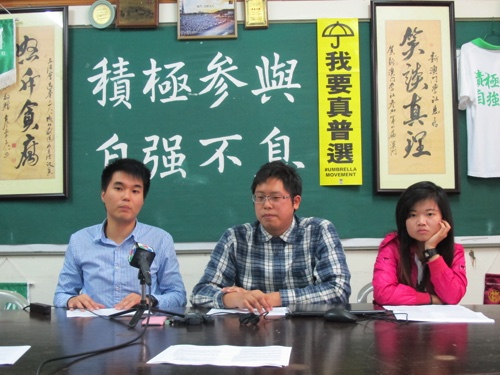 Political activist Jason Chao is convinced that Macau’s new principal officials will most likely “commit human rights violations.” He claimed that “no matter where they were born and brought up, I always judged them based on their actions. And their past actions suggest that they will commit more human rights violations.”
As president of the Open Macau Society and member of the Macau Conscience group, alongside Sulu Sou, president of the New Macau Association, Jason Chao presented yesterday their joint report on Human Rights that was sent to the United Nations (UN) yesterday evening.
Upon being asked for his opinion on the new government lineup and its suitability to existing human rights campaigns, Chao recalled that “many of them have a long history of committing human rights violations,” starting with Sonia Chan, recently appointed Secretary for Administration and Justice and former head of the Office for Personal Data Protection (GPDP).
“Sonia Chan issued the order prohibiting referendum organizers from collecting and processing personal data,” he said, adding that “Wong Sio Chak [now appointed Secretary for Security] and Ma Io Kun [appointed Commissioner of the Unitary Police Service] took part in the concerned campaign against the unofficial referendum (…) So I am not optimistic about their actions when they take office.”.
Last summer, three pro-democracy groups launched an unofficial referendum on universal suffrage. Although the referendum took place online, five activists, including Jason Chao, were arrested after GPDP issued an order requesting them to stop collecting citizens’ personal data.
Chao stressed that this year has been “severe enough” when it comes to human rights violations, and that is why they will be presenting a more extended report than on previous occasions.
The report on Human Rights Issues in Macau 2014, which was sent to the United Nations yesterday evening, comprises of a set of recent events that have raised concerns over the possible violation of human rights.
Chao stressed that political and housing rights are the most pressing issues. The political activist advocated for a transition to the universal suffrage system, assuring that Macau’s government should address the political reform issue first.
“All of these issues have a common root in political rights, because if we had the right to change the government, we could hold principal officials accountable to us [citizens] directly. But they don’t report to us, and that’s the major issue we’ve been discussing over and over again,” Chao stressed.
The report draws on cases of alleged press freedom violations, as well as academic freedom violation, by mentioning the two cases of scholars sacked over their political beliefs this year, namely Eric Sautede and Bill Chou.
Violations of freedom of assembly rights, or labor rights are also included in the report. The associations recall that the government failed to initiate legislative work on a trade union law and on collective bargaining.
The unofficial referendum on universal suffrage launched last summer is also addressed, as well as matters related to discrimination against women and LGBT rights.

The University of Macau (UM) issued a warning letter to student Carol Lam after she hung a yellow banner at the Hengqin campus’ library in support of the Occupy Central movement in Hong Kong.  As a member of the Macau Conscience, Carol Lam told the press at a conference yesterday that she has also received a warning letter for distributing leaflets promoting political fora. Jason Chao, president of Macau Conscience, recalled that UM “was quite smart” when issuing the letters, “as Carol was not accused of putting the banner up without approval, but for hanging up a banner that could pose a risk to UM members.”