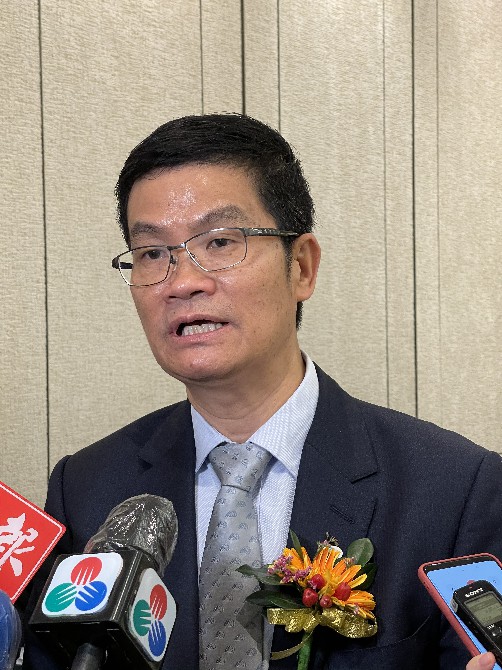 A centralized licensing system for construction workers should be established to eradicate the difficulties contractors encounter in finding reliable workers, Lo Chi Cheong, director-general of the Macau Construction Association, has proposed on the sidelines of an association event.
According to the association manager, it is difficult for construction contractors to easily find workers for their projects because “anybody can claim themselves to be construction workers,” Lo said.
It is time consuming for contractors to confirm whether a candidate has legitimate skills for the job.
As such, he has proposed the aforementioned licensing system. He used a similar system on the mainland to justify his opinion. In mainland China, a construction worker can obtain a license after passing certain exams which test knowledge of a particular skill.
He is happy to issue such a license, operating similarly to an accreditation system managed by the legal sector. “However, we are lacking the public agreement to do so,” Lo explained. “If the public or the government appoints us to run the system, we’re happy to do so.”
When asked about unemployment in the industry, the association director hoped that the government would build up a database showing the number of unemployed construction workers.
In addition, Lo said the number of skilled and willing construction workers has been falling, with many skilled workers having retired.
Many skilled workers have either retired, got promoted or changed career paths. newcomers, in contrast, changed their career paths to work in the construction industry, Lo admitted. They can only be briefly trained before they start working in the industry.
The association director also admitted that it is difficult to attract young newcomers due to the nature of the industry. “Who would choose an energy-consuming job?” he asked.
At the same occasion, Secretary for Transport and Public Works, Raimundo do Rosário, commented on unemployment in the construction industry.
“I think there are quite a number of public and private construction work this year, so I asked [the industry] to beware of the situation,” the official noted. “The government has invested more in public works this year, thus employment in the industry should not be a problem.”
“Considering factors in Macau, the quantity of construction works should not be seen as low,” Rosário revealed. “Of course, when you compare now with the peak period when all casinos were building properties [it’s now worse].”
Judging from the applications the DSSOPT has so far received, the official thinks that the sector will have enough employment.
When questioned if the government can help workers get employed, the Secretary said there is not much his team can do under his branch. He explained that when the government concludes a tender, it is assigned to a company.
“Finding people to work on a project is the concerns of the company,” he added. “In all these years we have not interfere with this matter. But again, I have reminded the industry to be attentive to the matter.”
However, the Chief Executive has previously ordered the municipal bureau to ensure employment right of local construction workers. On this matter, the official said, “We haven’t been [levying a threshold], but I have requested the industry to beware of the condition.”
“For some public works, we require the tender winner to be a local company. Even with that said, we have not restricted them from employing workers of specific nationality,” the official added.