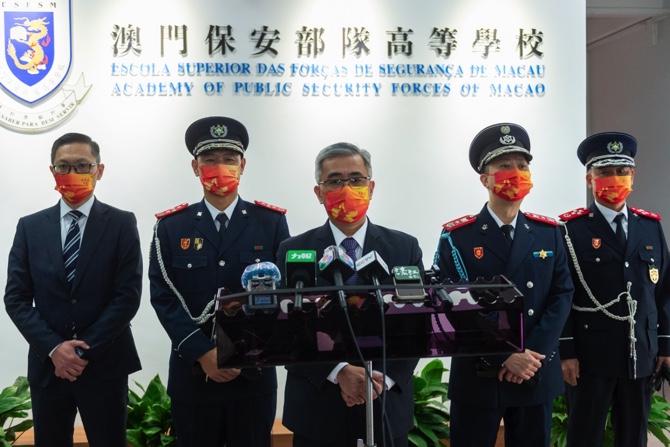 Foreseeing that law enforcement will be increasingly challenging due to a changing environment, Secretary for Security Wong Sio Chak encouraged local police to keep up their good work in a speech given as part of Police Day of China celebrations yesterday.

Wong re-visited the ideal of the authorities – proactive, communal and transparent policing – to encourage his team. They should, he said, motivate and improve themselves, as well as stay close to the public to broaden their horizons.

As “police officers in the new era,” local police should work pragmatically and responsibly to make greater contributions to the overall security of the country and the social stability of the city, the senior official added.

Mentioning national security, the senior official pledged that the security branch “is committed to safeguarding the authority of the Constitution and the Basic Law. It will also constantly improve and refine the legal system and action mechanism regarding national security.”

However, law enforcement authorities will not shirk from combating smaller crimes, he added.

The Police Day of China, as Wong put it, was established last year to highlight the diligence and loyalty of the country’s police. AL