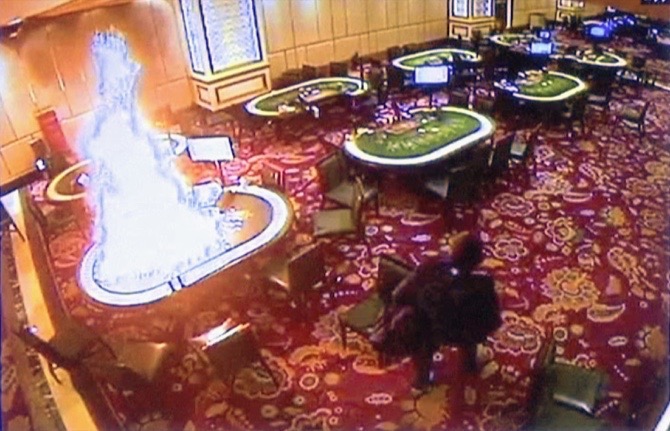 The annual report covers 13 jurisdictions in the Asia-Pacific region, including mainland China, Taiwan, Hong Kong and Macau. The entry for the MSAR is titled “Two Cheers for Macau”, comparably more optimistic than Hong Kong’s “A Tighter Grip” and Taiwan’s “Walking the Tightrope”.

Speaking to the Times last night, Vickers explained that the recent growth in gaming revenue was a strong sign of stability in the SAR, but the reliance on the VIP market was a slight cause for concern. For that reason, he said, “Macau gets two stars [cheers], instead of three.”

Vickers also reiterated concerns of a marginal threat of terrorist activity in Macau – as in previous reports – given the “nexus of Chinese, American and Jewish interests in the gaming sector.” Gaming tycoons Sheldon Adelson and Steve Wynn are both American and have Jewish origins.

The risk analyst said that the biggest threat comes from China’s Muslim-majority Xinjiang Province; the believed origin of a number of recent attacks on Chinese soil including a 2014 knife attack at the Guangzhou Train Station Plaza.

Vickers praised recent efforts by Macau law enforcement agencies in stepping up security and anti-terrorism drills, but stressed that incidents such as October’s Las Vegas mass shooting and June’s arson attack in a Philippine casino still remain a possible, albeit unlikely, occurrence in Macau. This is in part due to the difficulty in acquiring firearms and explosives in the city, the report notes.

“I am happy to see Macau authorities taking this threat more seriously,” he told the Times.

In terms of the economy, Vickers highlighted the strong recovery seen last year in Macau’s gaming sector and concurred with analyst predictions of continued strength into this year.

However, growth in gaming revenues may yet be stifled by Xi Jinping’s ongoing anti-corruption campaign, as well as recent policies to curb capital outflows from the mainland.

Moreover, the gaming concessionaire negotiations due to be held between 2020 and 2022 will be of particular concern to U.S. operators, the report noted, as “each applicant must submit a formal tender, meaning American companies’ interests may possibly become hostage to volatile Sino-U.S. relations.”