Showcasing the art of the Japanese tea ceremony 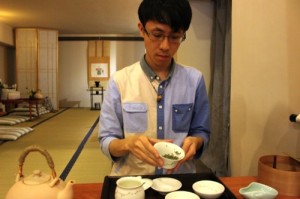 Setting foot in the Japanese style teahouse, Tealosophy, the tatami floor inside might give people the illusion that they are indeed in Japan.
One of Tealosophy’s founders, Justin Ng, told the Times that the teahouse, which opened recently on Rua da Barca, San Kio, seeks to bring the philosophy behind the tea ceremony to Macau.
Mr Ng said that he has learnt about the procedures of both the Chinese and Japanese tea ceremonies, which share a historical link.
“The Japanese tea ceremony has actually maintained the traditional way of tea appreciation of the Chinese Song dynasty,” he expressed.
Even the Chinese name of Tealosophy, Bianjing, is in fact the name of the Song dynasty’s capital, which indicates there is a relationship between the tea ceremony and ancient Chinese culture.
For Justin Ng, tea is not only a beverage, it is also related to philosophy and Buddhism.
“In the early development of the art of tea ceremony, Buddhism played a significant role [in it]”, he stated.
“At that time, monks had to practice Zazen [a form of meditation] and tea helps to refresh people. So initially, the tea ceremony began among monks,” he said.
As a result, there are numerous elements of Buddhist culture that can be found in the Japanese tea ceremony. In many tearooms in Japan for example, there are Buddhism-related paintings and calligraphy hanging inside for people to observe during the tea ceremony.
Moreover, given that the taste of tea changes following the change of container, water temperature, weather, seasons and even mood, Mr Ng believes that it actually matches the idea of impermanence which is prominent in Buddhist philosophy.
Since they opened four months ago, Justin Ng believes that the reaction has been positive.
“For Macau people, this is quite a new idea. We are also – so far – the only tatami space in Macau so people have been quite positive toward us”, he said.
Some customers also told Mr Ng that they found his teahouse a comfortable place and have learned the art of “real tea-drinking” there.
“Some customers do like Japanese tea culture and have thus adopted an appreciative attitude that shows their enjoyment”, he said.
Justin Ng and his partner are the first in Macau to be awarded a certificate from Edosenke, a renowned Japanese tea ceremony school, which Mr Ng claimed has also helped attract more customers because of the sense of professionalism they now have.
Speaking about the location of his teahouse, Justin Ng stated that they chose the area because they desire a local clientele.
“Also, in this area, there are not that many places for people to hang out at night (…) There are not many places where you can have a drink and chat quietly in Macau and in this area in particular. Therefore, we have chosen to set up here”, he said.
He said that the owners of the teahouse were concerned with whether or not people would accept this type of teahouse and tea-drinking style because it might be considered “old”. But the outcome, he reckoned, is better than expected as “people have found this [tea-
appreciation style] new and unheard of.”.
Justin Ng also said that he is optimistic about the future of the business.
He revealed that they are currently looking for more new products and snacks and are even planning on offering tea ceremony classes in the upcoming months.
“Many customers have already asked about the classes”, he said.
The teahouse is planning to open classes in Chinese first and will then later offer tea ceremony classes in English to cater foreign customers who do not speak Chinese.
Justin Ng concluded that, unlike alcohol and coffee, tea as a beverage has more connections to cultural items such as poems, flower bouquets and incense.
“Tea can be a simple beverage, but it can also be a philosophy.”