Singapore luxury co-living comes with steep prices and no apologies 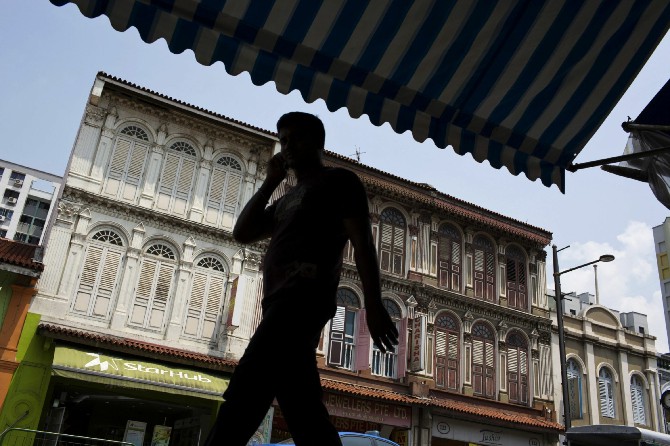 Co-living concepts are largely similar across Asia. Residents pay for a private room with a bed, and common areas like living, dining, kitchen and often bathroom, are shared.
Singapore’s Figment Pte is setting out to change that, offering residents their own piece of the city-state’s history and local flavor.
Its residences are heritage shophouses — some built in the 1930s — with differing interior concepts. At one in Little India, a 10-minute drive from the Orchard Road shopping district, the space has a mix of colonial and oriental vibes.
At its entrance, columns have been hand painted with animal-patterned chinoiserie by an artist flown in from China’s Fujian province; Islamic-influenced eaves adorn the roof.
Stepping into the house, the walls and staircases are chalk white. The floors and kitchen splash-backs are fitted with charcoal tiles. In the living room, a rattan sofa is surrounded by large, leafy plants, evoking the feel of being in one of Singapore’s ‘black and white’ colonial bungalows. Each bedroom has a private ensuite bathroom and kitchenette.
While other co-living operators typically organize activities for tenants to bond, like casual weekend barbecues, Figment offers bi-monthly private dinners, inviting well-known Singapore chefs who put a posh spin on local street fare.
With those perks and Instagram-worthy interiors come steep prices. A room in one of Figment’s shophouses starts at around SGD2,000 ($1,440) a month and can stretch to over SGD4,000. Even in Singapore, one of the world’s most expensive property markets, you could easily rent a two- or three-bedroom apartment for that.
Figment’s founder and 32-year-old chief executive officer, Fang Wei Low, makes no apologies, saying it’s a key strategy to keep ahead of competitors in what’s becoming crowded market.
“What we offer is a response to market demand. We offer boutique homes and there’s demand for that,” Low said. “If other people want cheaper and more minimal options, there are many apartments to choose from. They’re not our customers.”
Low started Figment in May last year. The company now has 14 shophouses, each with five suites.
Inspiration for Figment came after Low joined the family property business, which centered around buying shophouses and leasing them out to expatriates. A graduate of New York University and Wharton School of the University of Pennsylvania, Low quit the corporate world in 2015 after a two-year stint as a derivatives analyst at Goldman Sachs Group Inc.
The co-living sector in Singapore is still in its nascent stages. Operators in the city-state number less than 10 but competition is fierce.
There’s rising demand among expats and local millennials seeking alternative living options; many are enticed by co-living’s minimum lease duration of three months versus one year in the conventional rental market. The ability to network over extracurricular activities such as private parties and sporting events is also appealing.
Already, consolidation is gathering pace.
In January, Hong Kong-based Dash Living, whose backers include Mindworks Ventures and Clearmind Capital, acquired Singapore’s EasyCity. Hmlet, which raised $40 million in a Series B round led by Burda Principal Investments in July, last week signed a new collection of properties in Singapore’s Tiong Bahru, bringing its portfolio of rooms in the city-state to more than 1,000.
As the market expands, operators need to offer unique and curated experiences, according to Kishan Pillay, a partner at Singapore-based TSMP Law Corp. “First and foremost, it shouldn’t be a race to the pricing bottom,” he said.
It also probably won’t be long before property developers and other real estate firms start buying or partnering with proven co-living operators to get into the sector, Pillay said.
Cognizant of that, Fang has other strategies to elevate Figment. Its shophouses offer as much local flavor as possible – interiors, furniture and homewares are all locally designed and produced.
Ceramic mugs, for instance, are made with clay pigments taken from the soil of the shophouses when they were under construction. Wood for some of the homewares comes from local trees. The Singapore-handcrafted laundry bags are fashioned from olive-green canvas, reminiscent of those used by the city-state’s military.
Each shophouse also has a distinctive interior. One currently under construction will be decked out in all white, down to five of the six koi in the indoor pond at the base of the staircase. Only one fish will be orange, to accentuate the whiteness of the house.
Low also plans to expand Figment to Hong Kong and Sydney, employing the same “hyper local” concept in those two markets.
“We don’t want to grow for the sake of growing or you’ll end up like WeWork,” he said. “We want to stay true to our concept and will be picky when it comes to investors also.”
Shruti Swarup, a 34-year-old entrepreneur who’s been living in one of Figment’s shophouses since August, said the space’s sense of history and depth of design were main reasons why she chose to rent a suite instead of going with other co-living options.
“I love the fact that these shophouses have both character and convenience,” she said. “They have all the facilities while maintaining an old-world charm.” Faris Mokhtar, Bloomberg