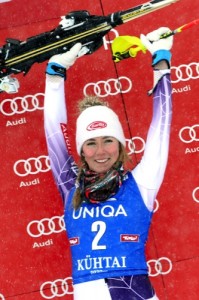 American teenager Mikaela Shiffrin led a women’s World Cup slalom after the first run yesterday, positioning herself for a first podium finish in the discipline this season.
The OIympic champion finished the Hohe Mut course in 50.27 seconds to lead Tina Maze of Slovenia by 0.15. Sarka Strachova of the Czech Republic was 0.25 behind in third with the rest of the field at least half a second behind.
Sweden’s Frida Hansdotter, who has been on the podium at every slalom this season, was fifth and had 0.60 to make up in the second run.
“It’s really a course to attack, and I did,” Shiffrin said. “I definitely attacked it and there are even some spots where I can make up some time.”
Shiffrin has won the World Cup slalom title for the past two seasons but has failed to reach the podium in three races this season, finishing 11th, fifth and fourth, respectively.
Shiffrin backtracked from her plan to compete in her maiden super-G in Val d’Isere this month, and used the two-week break in technical races to put in extra slalom training in Santa Caterina, Italy.
“We have been working on really getting back to that feeling I had last year when I had really good timing at each gate. I was just on it all the time,” the American said. “Figuring out what I need to do in the morning for warm-ups so my legs are ready to go.”
Shiffrin also changed equipment, “finding out a ski and a setup that works together and that suits my skiing.”
Shiffrin, who also led a giant slalom after the first run on the same course Saturday before placing third, wasn’t clean in the middle part of her run but recovered quickly.
Maze mastered that section of the course better and led Shiffrin by 0.15 at the final split but lost three-tenths before finishing.
Veronika Velez Zuzulova of Slovakia posted the fastest split times and was almost four-tenths ahead but lost balance and fell shortly before the finish.
The event — the last race of 2014 — was moved from Semmering because of a lack of snow in the resort near Vienna. AP