Sky’s the limit for Venezuelan Yulimar Rojas at track worlds 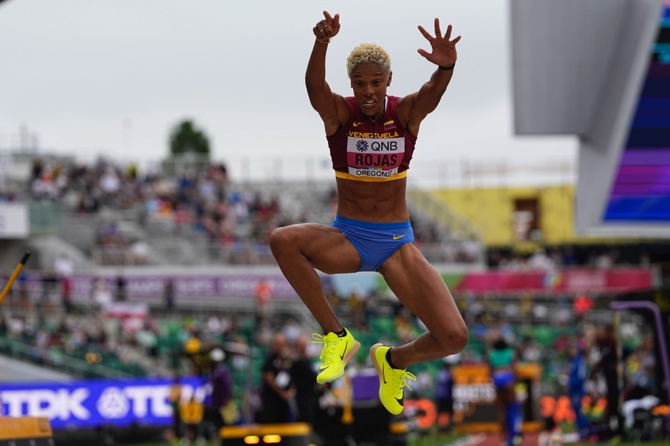 Yulimar Rojas, of Venezuela, competes during qualifying for the women’s triple jump at the World Athletics Championships, last week

In a country where the economy collapsed years ago, Yulimar Rojas was born in a house with a broken roof. From a hole in that roof, the future Venezuelan triple jumper could see the sky, and perhaps since then, she became used to seeking new heights.

As a kid, she changed her life by having the audacity to send a message to a Cuban high-jump legend Iván Pedroso seeking help. Now, she is a star herself, known for dances that go viral on social media, as a judge in beauty pageants and for being a voice of the LGBTQ community.

She also has been busy of late smashing the triple jump world record, and she is looking to break it again at world championships come Monday’s final, where her biggest rivals figure to be herself and the measuring tape.

“I’ve already said it before, I don’t like to set limits for myself as an athlete,” the 26-year-old said in an interview earlier this summer. “I have a very high ceiling, which is what my mind and heart want.”

Born in the small town of Pozuelos, facing the Caribbean, Rojas once wanted to play volleyball but after discovering the triple jump shifted focus.

She wrote to Pedroso on Facebook, asking for guidance. Pedroso, the long jump champion with four outdoor and five indoor world titles and an Olympic gold medal to his name, agreed immediately. By that time, he was a resident of Spain, which opened the door for Rojas to polish her talents in that country, away from the political and economic trouble that plague Venezuela.

Rojas has never expressed her position on Venezuelan politics. Instead, she has used her platform to speak out in favor of the rights of the LGBTQ community.

“I feel identified with this whole issue,” she said. “I have had a very nice relationship with a person who is very important to me. There will be a time when the relationship between people of the same sex will be more respected here in my country.”

When it comes to triple jump, an injury seems to be the only thing that could stand between Rojas, who first set the world record at the Tokyo Games last summer, and a third straight world championship.

On June 18, she missed what was going to be her last competition before worlds. A slight strain in her left leg sidelined her during a meet in Spain. But in qualifying Saturday, she stood far ahead of the field, making the final with a leap of 48 feet, 3 inches , which was 6 inches ahead of the next-best finisher.

In Tokyo last year, Rojas jumped 51 feet, 5 inches to crush by 17 centimeters a 26-year-old record held by Ukrainian Inessa Kravets. Rojas became the first woman to win Olympic gold for Venezuela. A beautiful night, except that the COVID-19 pandemic prevented fans from being in the stands to witness it.

Earlier this year, she improved her record by 3 inches. Her next goal would be 52 feet, 6 inches, or an even 16 meters. She considers it possible.

“I was born to jump that distance,” she said. “This is what motivates me the most. Nothing is impossible, that’s my motto.”  LUIS RUIZ, EUGENE, MDT/AP