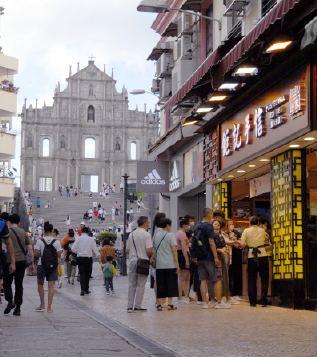 Macau has seen a recent increase in daily arrivals following the 78% drop from the July numbers in the second week of August due to the strict entry measures imposed after the city recorded four Delta variant cases.
Data released by the Public Security Police yesterday shows that the SAR recorded a total of 16,700 and 16,900 tourists on Monday and Tuesday respectively, registering a 2.3% rise.
Last Wednesday, Macau recorded 9,500 tourists, an increase of 123.2% from the day before.
Following the discovery of Delta cases on August 3, the government immediately imposed stricter regulations on border entrants, discouraging tourists in neighboring regions from visiting the city.
Zhuhai reduced the validity period of nucleic acid tests from 24 hours to 12 hours.
Therefore, Macau saw a sharp fall in cross-border population flow on August 3 — the first day that the government mandated all people leaving Macau to present proof of a negative Covid-19 test result conducted within 12 hours.
The total passenger flow number stood at 193,700 on August 3, down 39.7% from the previous day. Only 12,900 of this figure were tourists, a drop of 46.1%.
As for gaming, brokerage Sanford C Bernstein Ltd reported that the gross gaming revenue (GGR) for the period between August 9 to 15 was down 37% week-on-week, registering the lowest weekly result since September 2020.
The MOP78 million profit was the “lowest daily GGR since late September.”
Red and yellow zones reopened at 12 midnight yesterday as Macau saw no further cases after residents in the zones were quarantined for two weeks.
Entertainment and recreational venues and facilities have also re-opened.