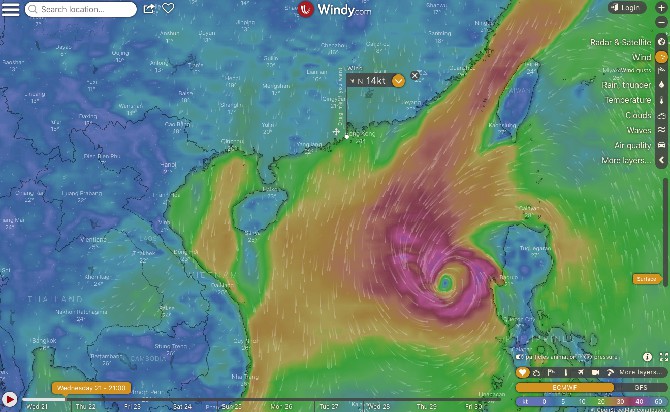 A tropical cyclone signal may be considered today depending on the development of the northeast monsoon that has been affecting Macau since late afternoon yesterday, with the northerlies expected to strengthen.
In an update from the Meteorological and Geophysical Bureau yesterday, it noted that tropical storm Saudel was set to come within 800 kilometers of the SAR.
Since it is expected to move slowly and remain at a distance from Macau, it will not pose an immediate direct threat to Macau today.
According to the SMG, it will be slightly dry and cool in Macau over the days to come.
Tropical storm Saudel entered the South China Sea yesterday morning.
The bureau said earlier that the northeast monsoon will affect Macau later this week.
As its forecast path and intensity are still uncertain, the tropical cyclone signal may still be considered, depending on the storm’s development. The public is advised to pay attention to the latest weather information.
Saudel will move across the central part of the South China Sea towards the vicinity of Hainan Island and the central part of Vietnam in the next couple of days, where over 90,000 have already been displaced after weeks of bad weather.
According to the Hong Kong Observatory, Saudel will also remain at a distance from Hong Kong and will be rather slow-moving for most of today, also posing no direct threat to the territory. With Saudel edging gradually closer to the coastal areas of Guangdong, and depending on the track of Saudel and the changes in local wind strength, the observatory will consider whether to issue the Standby Signal, No. 1, later today.
Yesterday, the tropical storm lashed the Philippines, causing widespread flooding in provinces south of Manila. The rainfall was set to have coincided with La Niña and the high tide, which has caused waist-deep floodwaters in the provinces south of the capital.