THE SOLE CANDIDATE ON THE CAMPAIGN TRAIL | Chui: Free medical cover should be maintained 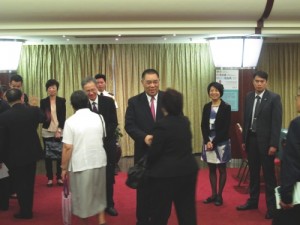 The Chief Executive candidate Chui Sai On deems the existing system of sending local patients outside of Macau for medical treatment to be an essential healthcare method. He also believes that the current scope of beneficiaries under the free medical scheme should be maintained.
Yesterday Chui met with Election Committee members of the 2nd sector, which includes representatives from the cultural, educational, professional and sports fields. The meeting was held at the World Trade Centre.
Several participants expressed their views. Given the lack of medical resources in Macau, a doctor from the professional sector suggested building a medical college. “In the long run, I think it’s necessary to set up a medical college. In the short run, we can work with neighboring regions and reserve some places for Macau high school graduates to complete medical degrees there. After that, students can return and receive training in our hospitals.” He also proposed a review of the free medical treatment scheme, given that it has not been reviewed since the former Portuguese administration.
In response, Chui said that the idea of building a medical college is worth consideration, but expressed that certain factors should be taken into account. According to him, Macau students’ knowledge base in science is relatively weak, and local hospitals are not equipped to provide (medical) education. “Given the small population and small amount of cases, we still believe that the system of sending patients outside Macau for treatment is very important,” said Mr Chui.
The system of sending patients outside of Macau for medical treatment has been operating as a supplement to local medical care. The Health Bureau covers all the medical fees and subsidizes transportation and meals.
In addition, Chui deems the existing scope of benefits available in the free medical system should be maintained.
A representative from the professional sector questioned whether Chui would continue the administrative reform if he is selected. “I can promise you that a review will be conducted on the administrative reform and we are confident of moving forward,” said Chui. The candidate singled out the central recruitment scheme, considering its achievements and original expectations.
A member of the education sector proposed larger space for schools attended by many students, and asked if it would be possible for the government to make use of some idle lands to enlarge and reconstruct schools.
In response, Chui said that, in the non-tertiary education system, schools owned by the government account for less than 7 percent. “Schools owned by social groups, religious organizations take on a lot of responsibility in education,” he added. According to Chui, the government would support the reconstruction of schools. “If there’s no space for a project, the government will help to find space, such as in the reclaimed lands.”
Talking about the concerns of members of the education sector regarding special education and integrated education, Chui stated that “the government should take on greater responsibility, because it’s not an easy job to carry out.” He stated that the government should provide support, even if private or non-profit institutions take the lead participating in special education.
A representative from the cultural sector mentioned the complicated application procedures for government subsidies that have developed in recent years. “Administrative clerks in cultural groups are not very familiar with the laws and the government’s policies. (…) We have to contact several government departments for an application (…) Is it possible to involve only one department to complete the procedure?”
Chui said that laws and regulations related to the application procedures would be reviewed. On the other hand, the government would provide training to the staff in various associations in order to help them better understand the procedures.