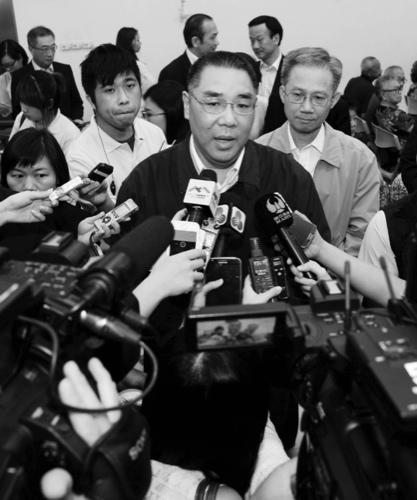 Chui Sai On continued to campaign for his re-election yesterday and met a group of Electoral College members from the political sector. David Chow, the Macau delegate to the Chinese People’s Political Consultative Conference, has taken the chance to launch an attack against the five secretaries and the directors of government bureaus. He also urged Chui Sai On to “be a bit stronger.”
Chow has criticized the excessive bureaucratic structure of the government and the lack of efficiency in the administration. He said that the five secretaries and bureau director “have undeveloped brains” despite the fact that it has been 15 years since the sovereignty handover and the substantial growth of Macau’s foreign reserve.
He also asked Chui Sai On to become stronger, reassuring Chui that those under him have to obey his orders.
Moreover, Chow accused local public servants of stalling the administrative process by evading their responsibilities.
“If the government’s administrative efficiency is stalled, it means that resources are wasted and it has to hire more people to work (…) If everybody is pushing their responsibility away to others, how can Macau be progressive?”
David Chow also argued that Macau’s reserve should not be allocated to public construction only. The government, he suggested, should contemplate the second distribution of income and work on retirement protection.
During his speech, Chow became so emotional that he addressed Chui Sai On with the wrong surname, which prompted the CE candidate to ask him to calm down.
Furthermore, another Elect-
oral College member, lawmaker Kwan Tsui Hang, pointed out that potential tourists do not see Macau as a holiday destination, since they are put off by the crowds of fellow visitors. She thinks that the issue is impacting the lives of residents as well.
In response, Chui Sai On said that he would seek changes in the future in order to improve the administrative efficiency of the government and work harder on administrative reform.
He also addressed the question of tourism capacity, pointing out that the central government has not opened the Individual Visiting Scheme to more mainland cities.
Chui Sai On reiterated that this is an important issue for the MSAR and suggested that the administration has to focus on the quality of life for local residents. JPL