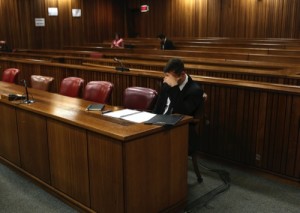 Oscar Pistorius must “pay for what he’s done” and his apology to the family of the girlfriend he killed was not sincere, a cousin of Reeva Steenkamp testified yesterday.
Kim Martin spoke on the fourth day of the sentencing portion of the double-amputee Olympian’s trial. Following the testimony, which is expected to end this week, Judge Thokozile Masipa will rule on what punishment Pistorius must serve after convicting him of culpable homicide for shooting Steenkamp through a toilet door in his home.
“My lady, I really believe the accused, Mr. Pistorius, needs to pay for what he’s done,” Martin testified before the red-robed judge.
“My family are not seeking revenge,” Martin said. “We just feel to take somebody’s life, to shoot somebody behind the door who is unarmed, who is harmless, needs sufficient punishment.”
Pistorius was acquitted of murder for the Feb. 14, 2013 killing and found guilty of the lesser crime of negligent killing. Masipa has wide latitude when deciding on a sentence for culpable homicide, and could order a suspended sentence and a fine, house arrest, or send him to prison for up to 15 years.
Defense lawyers have argued for a sentence of three years of house arrest with community service. In the first part of the sentencing hearing, they called a psychologist and social workers, who said that Pistorius should not go to prison because of his ongoing emotional suffering. They also said his disability as a double amputee who needs prosthetic legs would leave him vulnerable in jail.
Chief prosecutor Gerrie Nel has called suggestions of a house arrest sentence as “shockingly inappropriate” and wants Pistorius to be sent to prison.
Martin, the cousin, said a prison sentence would be appropriate for Pistorius and that she understood the rehabilitation program in jail to be humane and dignified, contrary to allegations by one of the social workers who testified for the defense. In her sometimes emotional testimony, Martin said many people had suffered because of Pistorius, including his own family, and that a sentence that excludes jail time would encourage the athlete to “feel within himself that what he’s done is all right.” Lynsey Chutel, Pretoria , AP