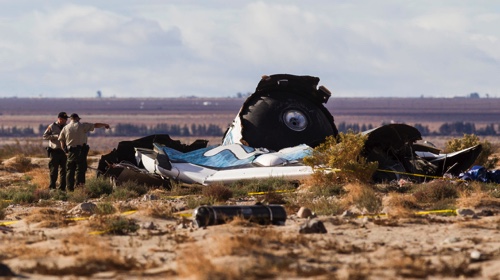 Law enforcement officers take a closer look at the wreckage near the site where a Virgin Galactic space tourism rocket exploded and crashed in Mojave, Calif.

Virgin Galactic’s experimental spaceship broke apart in flight over California’s Mojave Desert after a device to slow the craft’s descent prematurely deployed, federal investigators said Sunday.
National Transportation Safety Board Acting Chairman Christopher Hart said that while no cause for Friday’s crash of SpaceShipTwo has been determined, investigators found the “feathering” system — which lifts and rotates the tail to create drag — was activated before the craft reached the appropriate speed.
The system requires a two-step process to deploy. The co-pilot unlocked the system but Hart said the second step occurred “without being commanded.”
Hart said the investigation is months from being completed, and pilot error and mechanical failure are among many things being looked at.
Co-pilot Michael Alsbury, 39, was killed. Peter Siebold, 43, who piloted the mission, parachuted to the ground and is receiving treatment at a hospital for serious injuries.
The feathering is a feature unique to the craft to help it slow as it re-enters the atmosphere. After being unlocked, a lever rotates booms at the rear of the plane up to 90 degrees so they act as a rudder. After decelerating, the booms return to their normal position and the craft glides to Earth.
Hart said the feathers activated at Mach 1.0, the speed of sound, but shouldn’t have deployed until it had at least reached a speed of Mach 1.4, or more than 1,600 kph.
Virgin Galactic — owned by billion Richard Branson’s Virgin Group and Aabar Investments PJS of Abu Dhabi — plans to fly passengers to altitudes more than 62 miles (99 kilometers) above Earth. The company sells seats on each prospective journey for USD250,000.
Branson had hoped to begin flights next year but said Saturday that the project won’t resume until the cause of the accident is determined and the problems fixed.
SpaceShipTwo tore apart Friday after the craft detached from the underside of its jet-powered mother ship and fired its rocket engine for a test flight. Initial speculation was that an explosion occurred but Hart said the fuel and oxidizer tanks and rocket engine were found and showed no sign of being burned through or breached. Brian Melley, Mojave , AP