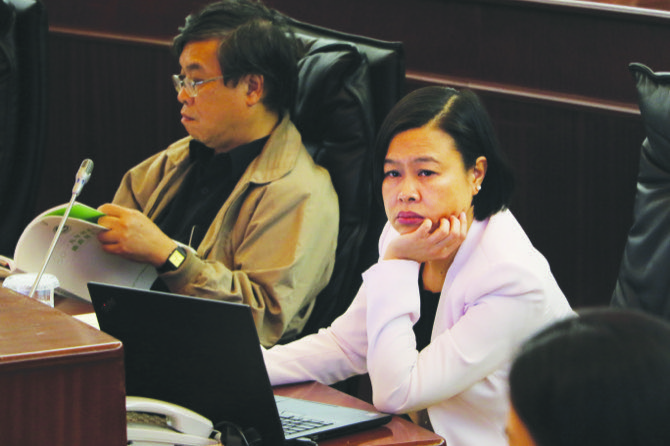 Agnes Lam is marking her 18th month as a lawmaker after being elected in October 2017 on a “middle ground” platform between the pro- democrats and pro-establishmentarians.

Her experience at Legislative Assembly (AL) sessions shows Lam leaning towards the safest stance – the point of least contention – trying to appease both camps. But her middle ground stance during yesterday’s session was starting to irritate at least one lawmaker.

Lam – who won a seat at the AL on her third attempt – focuses on addressing public housing and transport issues, as well as matters affecting the region’s most vulnerable groups.

In previous interviews, Lam has explained that she aims to be a “middle ground” between opposing lawmakers at the AL, not wanting to fall squarely in either camp.

As seen in several AL discussions, debates and voting sessions, Lam is regarded as conservative, yet sometimes inconsistent, when addressing issues raised by the legislative. Whether she votes in favor or against a proposal at the Assembly, she will often use explanatory remarks to express the opposite opinion.

During yesterday’s AL session, lawmaker Pereira Coutinho stressed during his time on the vote declaration that such time exists for lawmakers to justify their vote, and not to be used to criticize a lawmaker or proposal. He was addressing Lam specifically – though he did not mention her by name – who is known to use vote declarations to explain a stance contrary to the position in her vote.

“The vote declaration exists for lawmakers to be able to justify to the population the reasons why they voted in favor, against or abstained, during the voting process. It cannot be used to criticize a lawmaker or proposal, especially if you have voted in favor [of it],” decried Coutinho.

Defending herself, Lam told the Times last night that she has always believed lawmakers should take every chance to discuss the pertinent issues and that it is their responsibility to proactively share their opinion on legislative matters. The legislator also argued that disagreement should be welcome within the AL as that is the purpose of debate.

“It seems that Coutinho was criticizing me,” Lam said. “I was explaining why I was voting for the bill. I just needed to clarify because I found that, before I joined the assembly, I thought that we should always say yes to the debate. I just think that’s something we can do.”

“If we all agree that we should criticize the government, then why are we debating?”

Accordingly, Lam explained why she voted against a debate proposal raised by fellow lawmaker Sulu Sou, saying that it was more an opportunity for the airing of the lawmaker’s opinion than a chance for the legislators to honestly discuss the issue.

“I found that the topic was wrong, so I voted against it,” said Lam, “and people shamed me.”

Political commentator Larry So told the Times that although Lam stands in the middle, she tends to lean more towards the conservative side.

“There are some incidents in the community [that] call for a radical [approach] but it seems that [she] votes alongside with the so-called conservatives; all the pro- establishment branches,” So told the Times.

Yet Lam sticks to her campaign platform – particularly in relations to gender issues, women issues and domestic violence matters, as well as protecting the vulnerable groups.

“To a very large extent, she did offend the so-called establishment,” said the academic. “That’s why I would put her in the middle, but she tends to walk down a little bit [into] the so-called conservative, pro-government side.”

Although Lam has previously expressed a desire to see a more democratic society, So remarked that the lawmaker is probably in favor of gradual, rather than radical, change. The political commentator said that there is only a small part of the general public that is radically against the government.

“With her background, she’s got to consider her constituency – which is more middle- class, educated and middle- aged. These are the people who are more liberal but pro-establishment [at the same time],” he added.

“A number of people would look at it as a bit too slow,” concluded So. “Maybe she is hoping to achieve something by her second or third term, but definitely not within this term.”

According to her self- evaluation of her first year as a lawmaker, Lam considered that her efforts were “successful in calling people’s attention [to various problems].”

During her post for the first 12 months, the lawmaker received a total of 177 contacts from citizens involving around 1,000 people in total.

In her first year, the lawmaker was known for streaming videos on her social media channels to update the public with her efforts at the Legislative Assembly. However, her social media outreach has slowed considerably in recent months.

Lam was also the lawmaker who recently assisted a domestic violence victim, criticizing the Health Bureau for failing to respond to questions on making referrals for reconstructive surgery.