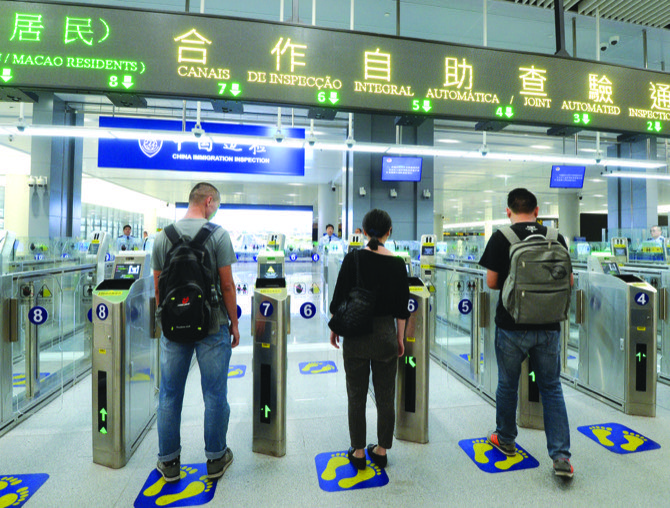 Low-earning migrant workers in Macau are willing to take great risks to acquire a higher salary and better working conditions – some by escaping across the border to China.

According to those familiar with the matter, the high cost of living in the SAR as well as the absence of a standard minimum wage are contributing to the situation.

Some of these risk-takers resort to illegally overstaying and working in China as domestic helpers, as the pay is usually higher than an equivalent role in Macau.

These workers – particularly those proficient in English – are in demand on the mainland, especially among those with children learning the language.

Visas to China are not costly for the majority of the region’s foreign workers, such as those from the Philippines, Vietnam and Indonesia.

In Macau, these nationals are able to acquire a visa, commonly known as the 144 visa, which is also open to a number of other nationalities.

This visa allows visitors to enter Zhuhai and come back on the same day for only MOP35 per person, but requires that they travel in a minimum group of three.

They are met with a “tour guide” at Gongbei Port of Entry, who then submits the visa paper that contains the applicants’ names to the immigration officer.

These visa holders are required to travel back to Macau on the same day.

However, some migrant workers have used this visa to enter Zhuhai without coming back, causing a headache for travel agencies in Macau.

Earlier this month, two Indonesian nationals working in the city opted not to return to Macau after applying for the 144 visa. The travel agency owner assumed they opted to illegally work in China, similar to other cases in previous years.

As seen on a social media post, these two workers’ visas in the SAR are set to end in May and December this year.

Jonathan Aquino, owner of Chinoy Travel & Tours, revealed that the travel agency he is affiliated with in China has decided to temporarily forbid Indonesian nationals from acquiring the visa – particularly those aged 18 to 59 years old.

They fear that their permission to issue the visa will be terminated if more cases appear.

“The problem for now is that they have not discussed what our penalty would be since it is usually Chinese immigration that decide. Usually the penalty would be in form of cash [fines],” Aquino explained.

He said that such escapes from Macau to China have been occurring more regularly in the past few years, and therefore his agency has tightened visa requirements.

A refundable security deposit of MOP2,000 is needed for a group, while tourists are only allowed to hold the visa when accompanied by a local resident or a blue card holder.

“Ninety-nine percent of those who never came back have taken up work [in China],” said Aquino.

According to the Times’ sources, these workers can earn RMB5,000 to RMB6,500 per month. That is significantly higher than Macau’s average salary for domestic workers, and the difference is magnified by the low cost of living on the mainland.

One migrant worker from the Philippines told the Times that monthly salaries could go up to RMB7,500 upon changing employer after a year.

However, these workers also find themselves in uncertain situations as many job agencies try to exploit the market.

According to Chinese-language media, many employers in China are being charged high fees by agents to acquire a household worker, with some paying up to RMB20,000.

For some agents, these fees include introducing a helper and dealing with their visa issues, while for other agents, it only covers the finding of an employee.