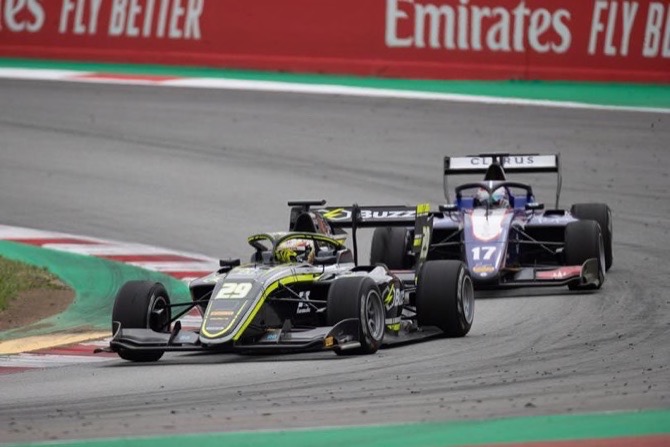 As the Times reported on March 4, the Macau Grand Prix Organizing Committee (MGPOC) has now confirmed that the 66th Macau Grand Prix to be held this November will use the cars debuting this year at the FIA Formula 3 Championship (International Series). The announcement was made during a press conference for the annual sporting event yesterday afternoon.

The confirmation came from the president of the Automobile General Association China-Macau and coordinator of Sporting Subcommittee of the Macau Grand Prix, Chong Coc Veng, who said, “this year, the Formula 3 Macau Grand Prix – FIA F3 World Cup plans to introduce the latest FIA Formula 3 cars to Macau.”

“The new car[s] will be larger than the former models, while the horsepower performance is increased to 380 horsepower.”

Regarding the entrants’ list, Chong expects most of the teams and drivers currently participating in this championship “will come to Macau to compete in the FIA F3 World Cup.”

This is the major novelty of this year’s race, which will otherwise run in a very similar format to last year, featuring a total of six racing categories, three of which are international-level competitions scrutinized by the FIA (the FIA F3 World Cup, FIA GT World Cup, and FIA World Touring Car Race).

As the Times also reported in March, contrary to the last edition, this year the Macau WTCR race will not be the “Grand Finale.” This year it is being held at Malaysia’s Sepang Circuit from December 13 to 15, one month after the Macau Grand Prix.

The 2019 Macau Grand Prix has a budget increase of 22.7%, informed the president of the Sports Bureau (ID) and coordinator of the MGPOC, Pun Weng Kun, in reply to media questions on the sidelines of a press conference held at the Macao Science Center.

According to Pun, for the past two races the MGPOC has been trying to keep the budget unchanged and around MOP220 million. This year will see it raised to MOP270 million, an increase of almost 23%, which Pun justified with the increased prices of several products and services, and to the need to make some changes to the circuit, following the indication of the International Automobile Federation (FIA).
Questioned as to what changes would be made, Pun did not reply clearly, saying only that the changes were imposed by the FIA and were concerned with adding safety features to all participants from the several competitions.

One of the main announcements made at the start of yesterday’s press conference was that the Suncity Group would continue to be the title sponsor of the 66th Macau Grand Prix.

The announcement was made by the ID president, who also took the opportunity to thank the company for supporting the event over the years.

After the press conference, an agreement signing ceremony was held. Senior Vice President of Corporate and Community Relations Gina Lei represented the company and handed the MGPOC a cheque in the amount of MOP25 million.

Speaking to the media on the sidelines of the press conference of the 66th Macau Grand Prix, President of the Sports Bureau (ID) Pun Weng Kun said that, “so far we have nothing to add concerning what we  previously announced about the football match that has been discussed in society.”

According to Pun, the only confirmed match involves Southampton F.C. and Guangzhou R&F F.C. on July 23, and is being organized as part of celebrations for the 20th anniversary of the MSAR.

As for the July 27 match between Paris Saint-Germain (PSG) and Inter Milan, Pun continued to say that “so far, the ID has not received any requests for the use of the facilities of Taipa’s Olympic Stadium.”

When asked about a possible deadline for the request in order to make the match possible, the president of ID answered, “usually the requests are made at least one or two months ahead of the event date.”

However, he stressed that the ID was not “closing the doors to the possibility [that] such an event could take place in Macau,” merely that, “if the request arrives we need to analyze it and see if there are the conditions for it to happen.” RM