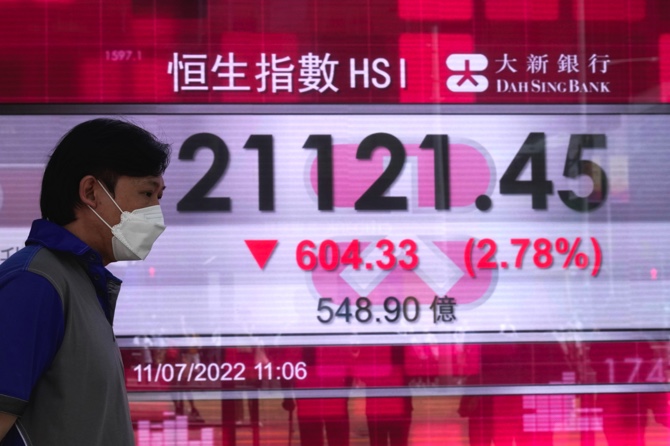 U.S. futures are down with corporate earnings season kicking off this week amid rising anxiety over how companies are navigating soaring inflation, and news about the spread of a new coronavirus variant.

Also this week, the U.S. will release fresh data about rising costs for both companies and families with inflation hovering near four-decade highs.

Shares are sinking in Europe at midday after most Asian markets also fell, with the exception of Japan’s benchmark, which rallied after the ruling Liberal Democratic Party garnered a landslide parliamentary election victory.

Germany’s DAX fell 1% as the shut-down of a major gas pipeline from Russia to Germany for annual maintenance brought concern Russia might not resume the flow of gas as scheduled.

“A recession is not the market’s base outlook, but until proven otherwise, investors will debate the depth of the growth hit, not the likelihood of recession; thus, good economic data is good news for stocks,” Stephen Innes of SPI Asset Management said in a commentary.

China reports its April-June growth data on Friday, and an update on U.S. inflation is due Wednesday. Investors also are watching for upcoming corporate earnings reports, which will give investors insight into how inflation is impacting businesses and consumers. Banks, airlines and health care companies start reporting midweek.

COVID-19 infections are also surging in some areas. The Asian gambling center of Macau will close all its casinos for a week starting yesterday and largely restrict people to their homes as it tries to stop a COVID-19 outbreak that has infected more than 1,400 people in the past three weeks.

The quickly changing coronavirus has spawned yet another super contagious omicron mutant that’s worrying scientists as it gains ground in India and pops up in numerous other countries, including the United States, Australia, Germany, the United Kingdom and Canada.

Scientists say the variant – called BA.2.75 – may be able to spread rapidly and get around immunity from vaccines and previous infection.

This week, major airlines, banks and health companies will post quarterly earnings and the U.S. will post data on consumer and producer prices.