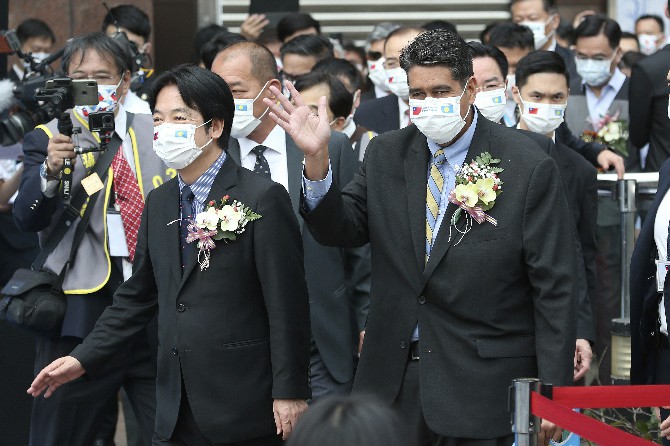 The president of the Pacific island nation of Palau was visiting Taiwan yesterday along with the U.S. ambassador to his country, a show of solidarity as China increases diplomatic, economic and military pressure on Taiwan.
Palau President Surangel Whipps said during a meeting with Taiwan’s President Tsai Ing-wen that he and his delegation “feel like home when we are here.”
In her welcoming statement, Tsai noted Whipps was the first foreign leader to visit Taiwan since the beginning of the pandemic and said a travel bubble established between the two sides would be a “model for safe two-way travel that has been closely watched not just by our own people but also by the entire world.”
China has banned its citizens from visiting Palau, but Taiwan has responded by introducing a travel bubble between the two that will allow visitors to avoid being quarantined.
The presence on the trip of the U.S. ambassador to Palau, John Hennessey-Niland, was a further sign of Washington’s support for Taiwan, despite the lack of formal diplomatic relations between the two.
China claims Taiwan as its own territory to be brought under Beijing’s control by force if deemed necessary and it has worked to internationally isolate the island.
Taiwan has just 15 formal diplomatic allies but operates a network of trade offices around the world that act as de-facto embassies, including in the United States, Japan and most other major nations.
China has blocked Taiwan’s participation in international organizations including the United Nations and sought to scupper the island’s relationships with other countries by threatening to withdraw its own diplomatic presence and economic support.
In Beijing yesterday, Foreign Ministry spokesperson Hua Chunying repeated China’s opposition to formal exchanges between Taiwan and the U.S.
“We hope the U.S will pay great attention to China’s concerns and act prudently on the issue of Taiwan so as to avoid further damage to China-U.S. relations,” Hua told reporters at a daily briefing.
Chinese warplanes have increasingly been entering Taiwan’s southern airspace, with 10 aircraft reporting flying through the area on Monday. China has also protested over an agreement to boost cooperation between the U.S. and Taiwanese coast guards that follows visits by U.S. Cabinet officials to Taiwan and new sales of warplanes and other defensive equipment.
Beijing severed direct contacts with Taiwan’s government after the election of Tsai and her independence-leaning Democratic Progressive Party administration in 2016. Tsai was reelected last year to a second four-year term.
Taiwan still enjoys strong U.S. support, however, and the Trump administration last year sent the highest-level U.S. government delegation since the U.S. switched relations from Taipei to Beijing in 1979. MDT/AP