Street performers could be subject to permits 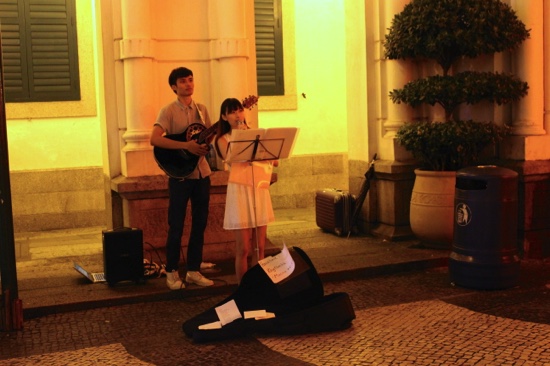 Street artistic performances” are the solution chosen by the government to “bring the arts closer to people,” said the Secretary for Social Affairs and Culture, Alexis Tam, in his introductory speech at the plenary meeting of the advisory board, which was held last Friday at the Tourism Activities Centre.
The proposal, presented in Friday’s meeting to the members of the Cultural Advisory Committee, gathered support but also raised a few suggestions and questions regarding its practical applicability.
Alexis Tam, who was speaking in the presence of the president of Cultural Advisory Committee, guaranteed that performers would be granted a permit by the Cultural Affairs Bureau in cooperation with other public services.
Tam also highlighted that this form of presenting performing arts to the public has a lot of advantages to both artists and the public in general, and is being followed by many cities and regions across the world, namely in Europe.
The scheme could be applied to different kinds of performances, such as theatre, dance, visual arts and handicrafts.
The government has already selected a few public open spaces in the territory that would be suitable to hold these performances, mostly public squares. The proposal states that the performances will only be allowed from 9.30 a.m. to 9.30 p.m.
Another aspect that is currently under consideration  is  the noise level (which should not exceed the 85dB).
As for the artists, the selection criteria have also been pre-defined. Performers should be over the age of 18 and possess a Macau ID or another document that guarantees their legal stay in the territory in order to be able to apply for a permit for performance.
The president of the Cultural Affairs Bureau, Ung Vai Meng, explained that the street performances aim to “enrich the cultural elements of Macau,” adding that for now the proposal is preliminary.
In January, Russian busking artist (street performer) Roman Khromov was arrested by the police and accused of illegally occupying the street when trying to sell travel photographs of his trip around the world to help to finance his tour. Other cases of buskers being detained by the police have also been reported.

The public consultation held by the Cultural Affairs Bureau (IC) for the first group of buildings and sites proposed to be heritage listed has been concluded. According to figures presented by the IC at the Cultural Advisory Committee plenary meeting, the consultation gathered around 600 opinions and was attended by over 200 people during the public sessions.