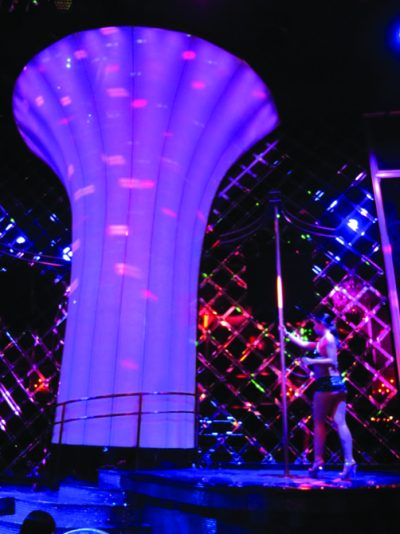 Celebrating a job well done with a group trip to the gentlemen’s club feels about as modern as, well, the term “gentlemen’s club.” But it’s still common enough that at least one company – Under Armour Inc. – had to tell employees to stop expensing visits to strip clubs earlier this year.

Live adult entertainment generates about USD6 billion in annual sales, according to WestPark Capital analyst Ishfaque Faruk, with what he calls “consumer-staple type growth” – around 1 percent to 2 percent per year. He follows the industry as part of his coverage of RCI Hospitality Holdings, and industry executives have persuaded him business customers are still part of the financial model.

The past year has brought new attention to the sexist and harassing behavior women face in many workplaces, from explicitly sexual overtures to getting passed over for leadership positions and raises. After all that, the idea that a strip club is a good place to, say, bond with a client or co-workers seems especially reckless, said Marianne Cooper, a sociologist at Stanford University’s Women’s Leadership Innovation Lab.

“Business does not have to get done this way,” she said. “It’s not that it’s central to business, but it is central to these kinds of dysfunctional toxic cultures where women aren’t seen as competent colleagues.”

Under Armour Inc. got the memo earlier this year, when it explicitly banned strip clubs as an allowable corporate expense. But whether on the corporate card or not, club owners say their corporate clientele is as enthusiastic as ever.

The Rosewood Theater, a high-end Manhattan strip club popular with Wall Streeters, is planning to expand, with pop-up clubs taking test runs in four U.S. cities next year. At clubs in Detroit, Houston and Dallas, there are still plenty of corporate cards and briefcases. And shares of RCI, which owns about 40 adult-themed clubs and restaurants, hit a record high in July.

“For guys just throwing corporate cards down, you hear more about it in bigger cities like New York and San Francisco, convention cities like that,” said Dave Manack, associate publisher for ED Publications, a trade magazine that covers the strip-club industry and organizes an annual conference. “The rank and file club in Poughkeepsie or Lubbock, Texas, that’s not their bread and butter.”

As many as 150 customers head to the Rosewood each night, according to a person associated with the business who asked to remain anonymous because he’s not authorized to talk to the press. Launched by Kalin Moon, whose company is called Die Happy Tonight, the club hosts a steady stream of customers until 4 a.m., when New York City’s bars have to close.

The arrangement is novel: The women who entertain the patrons aren’t formal employees – technically, they’re guests invited by management. But they do earn money, in the form of tips from customers; club management instructs them to forgo perfume, so patrons don’t return home with a telltale scent.

Next year, Moon will take the show on the road, targeting the moneyed professionals in Silicon Valley, Miami, Los Angeles, and Austin, Texas, with pop-up events in existing clubs in those cities or at invitation-only parties in rented loft spaces.

As it is, company expense accounts only make up a fraction of revenue, says Angelina Spencer, the executive director of the Association of Club Executives, or ACE. The organization, which represents more than 1,000 clubs, estimates it at about 10 percent.

That doesn’t mean patrons aren’t still entertaining clients or partying with co-workers at strip clubs. It just means they’re footing the bill themselves or lying about it to their employer. Club names still never show up on a credit card bill or expense account- they’re replaced by the kind of neutral-sounding pseudonym that gives employees and husbands plausible deniability.

What’s more, existing clubs are in position of strength, Faruk said. Local stigma and zoning regulations keeps the total number of clubs in the U.S. at between 3,000 and 4,000 – about one-quarter the number of McDonald’s. “It’s actually, surprisingly, very stable,” he said.

Faruk says he sees lots of potential for the industry as individual operators retire and look to be bought out. Since August, RCI has announced the purchase of clubs in Pittsburgh and Chicago and has identified 500 more as potential acquisitions. Jeff Green, Bloomberg