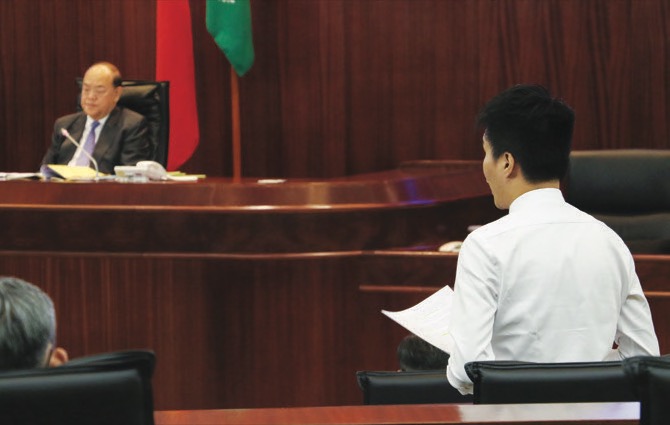 Lawmaker Sulu Sou is unhappy with the decision of the Legislative Assembly (AL), and more specifically its president Ho Iat Seng, for the refusal to consider a proposed amendment to the law for the election of the Macau Chief Executive (CE).

According to the lawmaker, the president of the AL, “thinks my bill involves a [change of] political system [and] according to the Basic Law, lawmakers cannot propose a change in that field.”

“I don’t agree and that is why I appealed,” said Sou.

The democrat lawmaker had initially presented a proposal that aimed to introduce changes to the method of election of the CE based on the evolution of a system that has been used since the first election.

In the proposal delivered by Sou, the lawmaker, acknowledging the difficulty in moving into a system of universal suffrage, called for the enforcement of a system that would, at least, avoid a single candidacy for the CE, proposing that each election would have a minimum of two candidates running for the highest post of the Macau government as a rule.

The bill, presented in January this year, received a reply from the president of the AL one month after. The reply refused to consider the bill on the grounds that such a topic is reserved for the government only to propose changes.

Sou disagrees and that is why he has appealed decision to the Executive Board of the AL, noting that there is no such statement within the Macau Basic Law that forbids lawmakers to present bills or amendments to any laws.

In a long justification, Sou notes, among other aspects, “if the legislative intention about the electoral law for the Chief Executive was reserved for the government, the commission for the writing of the Basic Law would have regulated [the matter] clearly, like it happened [in the case of] Annex II,” concerning the method of composition of the AL.

“In that sense, we can deduce that the legislative intention of the Basic Law does not forbid the lawmakers to present any initiatives to create new laws or review the electoral law [regarding] the Chief Executive.”

Refuting the allegations of the AL president, Sou noted that the “process of proposing candidates” cannot be confused with a “political structure.” By this latter term, Sou refers to organizations of political power, such as the executive, legislative and judiciary, as well as the relation between such powers and the entities that exert control or supervision over them.

Sou also cites opinions from noted figures such as Professor Xiao Weiyun, a Chinese law expert who has a vast experience in the practice of the “one country, two systems” policy and who was intimately involved in the creation of the Basic Law of both of the Macau and Hong Kong special regions.

However, jurist and legal expert António Katchi expressed his agreement with the stance taken by the AL. He said that such amendments to the CE election law should be of exclusive initiative from the government.

“I think this matter fits into the exclusive initiative from the government,” Katchi told public broadcaster TDM. “I never saw arguments strong enough to turn [the discussion] in the opposite direction, including these that are now [discussed].”

Irrespective of Ho Iat Seng’s decision as AL president, the issue has been accepted for discussion in the plenary.

Lawmaker Sou wants Ho to abstain from participating in the debate because he has already signaled an intention to run for the top post. That’s an opinion shared by Katchi who believes that Ho should disqualify himself from debating the topic and delegate such duties to the vice president of the AL.

Looking back at Macau when it was under Portuguese administration, Macau’s leaders were appointed by Lisbon. However, nothing was able to be done back then because Macau was a colony. What makes people discouraged is that, in the Macau of 2019, in a city where people parade the one country, two systems initiative and the high autonomy [it apparently provides], the Chief Executive, who is responsible for leading the SAR and holding the SAR’s fate in his hands, is still chosen by only a few hundred people behind a closed door,” lawmaker Sulu Sou voiced during Friday’s session at the Legislative Assembly.

“There are only four months left until the small- circle election by 400 people. Being an important political affair, which should be of great relevance to residents, the residents have no knowledge of who the candidates [are],” said Sou.

“The small-circle candidates do not need to worry about not having enough time to campaign in all the districts of Macau. All they have to do is just wait for someone to give orders,” said Sou.

“More than 300,000 voters continue to be on the sidelines watching the show,” complained the democrat lawmaker. “I decided not to participate in the 22-member election committee because I have a very humble but big dream; that one day I will go to the polling station with all the Macau people to cast that one vote.” JZ