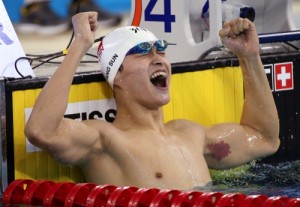 Sun Yang powered to gold in the men’s 400-meter freestyle as a resurgent Chinese swim team cleaned up in the Asian Games pool yesterday, winning six of seven gold medals on offer.
Swimming beside main rival Park Tae-hwan of South Korea and 200 freestyle winner Kosuke Hagino of Japan, Sun steadily built his lead throughout the race, finishing in 3:43.23. Park, despite having the crowd in full voice screaming his name, finished behind Sun and Hagino for the bronze.
Japan, which led the swimming medal standings after two days, was virtually shut out as Sun helped give China a commanding 11-7 lead in the gold medal stakes in the ultra-competitive swimming events.
China was clearly ahead on the overall Asian Games medal stable after 96 of the 439 events, with 40 gold medals. Host South Korea was next with 18 gold, two more than third-place Japan.
Elsewhere at Incheon, Taiwanese weightlifter Lin Tze-chi set two world records in the women’s 64 kilogram class — 261 kilograms in the combined weight and 145 kilograms in the clean and jerk.
South Korea overcame a powerful Chinese team to win the team men’s badminton final, and in fencing beat China again in both the women’s team saber and men’s team epee gold medal bouts.
Japan’s Yuya Kamoto stormed to victory in the men’s gymnastics all-around, followed by teammate Masayoshi Yamamoto and South Korea’s Lee Sang-
wook.
China’s dominating night in the pool was highlighted by Sun’s return to the top of the podium.
In other events, Ye Shiwen won the women’s 400 medley in 4:32.97, more than five seconds ahead of Japan’s Sakiko Shimizu, with Vietnam’s Nguyen Thi Anh Vien in third.
China’s women also took gold in the 50 backstroke, 100 butterfly and 4×200 freestyle relay. Fu Yuanhui started off the evening with a winning time of 27.66 in the back, edging out Yekaterina Rudenko of Kazakhstan and Japan’s Miyuki Takemura. Chen Xinyi beat teammate Lu Ying and Tao Li of Singapore to win the fly in 56.61, and China won the relay in 7:55.17 ahead of Japan and Hong Kong.
China’s Ning Zetao won the men’s 50 freestyle in 21.95, ahead of Japan’s Shinri Shioura and Kenta Ito, while towering Dmitry Balandin won Kazakhstan’s first swimming gold at Incheon and the biggest win of his career, taking the men’s 200 breaststroke in 2:07.67 from Kazuki Kohinata and Yasuhiro Koseki.
China also won the synchronized swimming free combination ahead of Japan and Kazakhstan. The judo medals were split, with South Korea beating Kazakhstan for the men’s team final, and Japan downing South Korea in the women’s. Christopher Bodeen, Incheon, AP