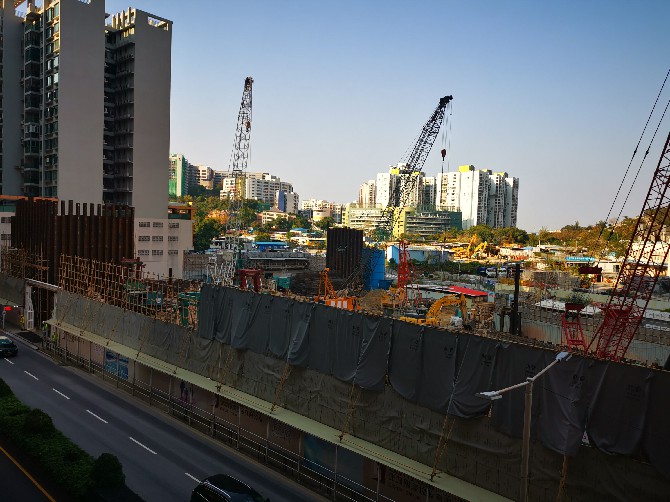 Residents of the Treasure Garden residential estate in Taipa have submitted a petition to the Chief Executive in the hopes of him ordering officials to manage the noise coming from pile drivers at a construction site opposite their estate.
The construction site, according to representatives of the petitioning residents, started construction in January this year. Pile drivers have been used since then, they added.
The residents protested that the pile drivers have caused severe impact on their daily lives. The strong vibrations caused by the machines have caused fear among the elderly and children residents, they said.
More than 10 residents in the estate have reported cracks on their walls and floors since the commencement of operation of the machinery. Many residents reported feelings of severe vibrations in their apartments during the operations of the machines.
With that said, they fear that the buildings’ structures may be affected by the vibrations. They also fear that should the structures be impacted or should residents be injured if parts of the walls fall, who is to take the blame.
On the other hand, the construction site is adjacent to a gas station. The residents worry that the vibrations may damage the underground pipes of the station. They said if that happens, the consequences will be severe.
It was stressed that the residents are extremely worried about the current situation and any possible future consequences. The residents’ representatives, meanwhile, requested the constructor of the project to opt for other machinery in order to avoid unwanted outcome.
Furthermore, a resident pointed out that the pile drivers used by the constructor were outdated. They questioned why the government allowed the constructor to not use a newer version.
Prior to this petition to the government head, the residents have also petitioned to the concerned government entity.
On February 8, the petitioning residents, accompanied by lawmaker Pereira Coutinho, had a meeting with the Land, Public Works and Transport Bureau, alongside the constructor of the project.
The lawmaker disclosed that the constructor had taken measures to lower the noise and the vibrations. However, the lawmaker said, stronger vibrations were reported by residents after the meeting. Some residents even reported more severe cracks in their apartments. They fear that the damage will become more obvious and irreversible.
Coutinho cited Sin Fong Building, which collapsed years ago, as an example to urge the government to attend to noise and building structure problems with seriousness. He asked the government head to instruct the authorities to follow up the conditions, especially in coordinating the change of pile drivers to a newer version.
He also asked Ho to instruct his team to help with building inspections, so as to avoid irreversible consequences.