TAIWAN | Taipei tells Beijing no to ‘one country two systems’ 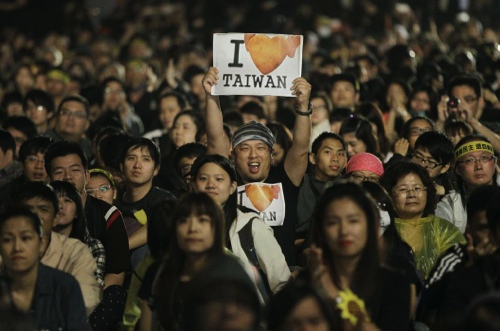 A protester displays a banner supporting Taiwan during a massive protest over the controversial China Taiwan trade pact in front of the Presidential Building in Taipei, Taiwan, Sunday, March 30, 2014

Chinese president Xi Jinping said reunifying the mainland and Taiwan is about ending political antagonism rather than about rebuilding territories and sovereignty, state media reported Friday.
Xi’s remarks to a delegation of pro-reunification groups from Taiwan come as sentiments rise among the Taiwanese public for independence. Many are watching how current events unfold in Hong Kong, regarding them as a litmus test for ‘one country two systems’.
China’s communist government has long sought to claim Taiwan, which it considers a renegade province. The nationalist government of the Republic of China retreated to the island in 1949 as its last foothold after losing a civil war to the Communists.
The nationalist government’s ambitions to reclaim the mainland later fizzled, and the island has become a de facto sovereign state, although there is no formal declaration of independence.
Animosity toward the mainland’s government has lingered in democratic Taiwan, which remains cautious about Beijing’s authoritarian government. Polls also have shown more people are favoring independence.
Xi warned against Taiwan independence, saying it would be unfeasible and hurt the relationship between the mainland and the island. “No secessionist act will be tolerated,” the Chinese president said.
Xi said Beijing seeks peaceful reunification and will use the principle of “one country, two systems” for Taiwan, as it has done for the former British colony Hong Kong.
Analysts in China have portrayed “one country, two systems” as a tryout for reunification with Taiwan one day.
However what puzzled many in Taiwan was that Xi would propose them the same political arrangement as Hong Kong even as protesters in the city were questioning it.
Xi said Beijing would “fully take in opinions and suggestions from all walks of life from both sides” and would “make arrangements that fully take care of the interests of Taiwan compatriots.”
“The national reunification we advocate is not merely unification in form, but more importantly, a spiritual connection between the two sides,” Xi said, as quoted in state media. MDT/AP