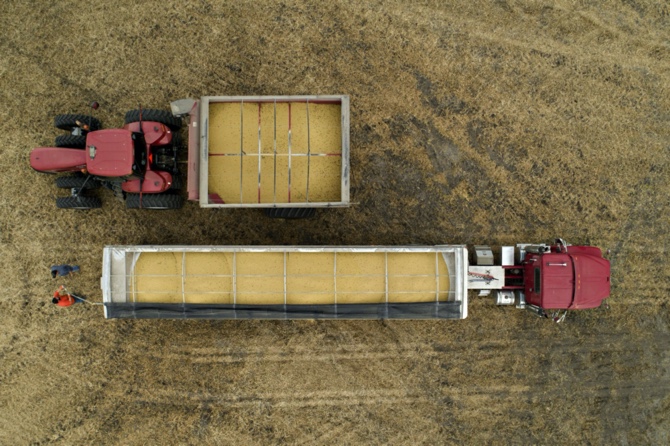 A U.S. demand that China spell out how it plans to reach as much as $50 billion in agricultural imports annually has become a sticking point in negotiations on a phase one trade deal, according to people familiar with the matter.

Chinese negotiators are resisting a proposal from American officials that it provide monthly, quarterly and annual targets for purchases, said the people, who asked not to be named discussing the private talks. China also insists that the two sides must agree to rollback tariffs in phases if a deal is reached, the people said. U.S. President Donald Trump said earlier he had not agreed to ease any levies.

A teleconference between deputy-level officials scheduled for late Wednesday night in Washington was expected to cover issues beyond agriculture such as intellectual property, forced technology transfer and enforcement, people familiar with the matter said.

There have been small signs that China and the U.S. are easing restrictions on imports of each other’s goods. Yesterday, China lifted a ban on American poultry that began in 2015, saying it would allow imports from qualified suppliers. The move comes after the U.S. Department of Agriculture made a similar decision to allow Chinese poultry into the U.S.

However, optimism that the U.S. and China are close to a limited trade deal has faded in recent days due to uncertainty over whether Washington would agree to rollback tariffs and also how any agreement would be enforced. Trump has said that the U.S. will substantially increase tariffs on China if the first step of a broader agreement isn’t reached.

China has also taken actions that could signal imports of U.S. farm goods are in jeopardy if talks sour. While China restarted purchases of some agricultural products as talks progressed, it is now delaying the unloading of American soybeans at its ports, the people said, which could slow down further purchases.

About 1.8 million tons of soybeans, mostly for state reserves, are being held up at China’s ports. Local buyers have to pay a hefty deposit to customs before they can collect refunds on the 30% tit-for-tat tariffs which China adopted because of the trade war. The deposits can cost as much as 60 million yuan ($8.5 million) per cargo and unloading can take about 28 days.

China’s Ministry of Commerce and General Administration of Customs did not immediately respond to faxes seeking comment on the enforcement mechanism and port delays respectively.

The two sides are conducting thorough talks on a phase one deal and removing existing tariffs is an important condition for an agreement, a Chinese commerce ministry spokesman reiterated at a regular briefing yesterday. The Wall Street Journal reported earlier that China is wary of putting a numerical commitment into writing, citing people familiar.

Trump and Chinese President Xi Jinping had planned to sign the partial agreement at an international conference this month in Chile that was later canceled because of social unrest in that country. A new site for the signing hasn’t been announced.

U.S. Treasury Secretary Steven Mnuchin said Chinese spending on U.S. farm goods will scale to an annual figure of $40 billion to $50 billion over two years as part of a partial trade agreement, though China has not publicly committed to that value and time frame. Bloomberg