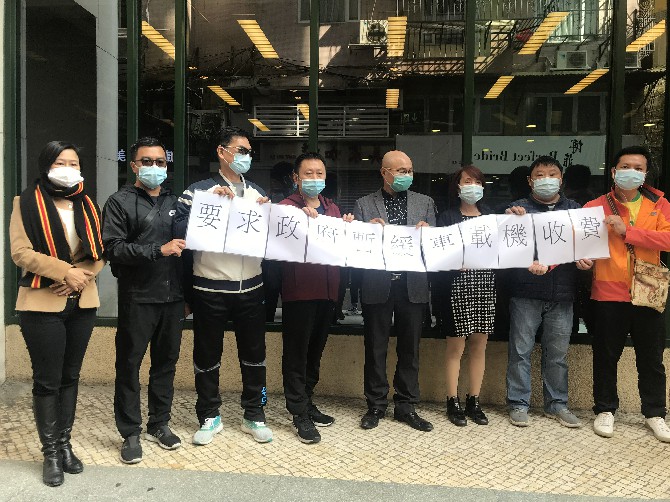 A group of the city’s taxi drivers yesterday demanded the local government temporarily suspend charging taxi drivers for the smart terminal installed inside their vehicles.
Lawmaker Agnes Lam accompanied six taxi drivers to the government headquarters, some of whom are also taxi license owners.
Starting from yesterday, all of Macau’s taxis must have installed a smart terminal, otherwise, without this terminal, a taxi operation will be considered illicit.
The smart terminal consists of a terminal, a meter, a flag, a receipt printer, a global satellite navigation system, audio and video recording equipment and an alarm device.
The Macau SAR government proposed to charge 300 patacas per month as a maintenance fee for the smart terminal in addition to a deposit of 5,000 patacas.
Speaking to the media, the representative of the group lamented, “The current government did not consult with [the taxi sector] at all.”
The group accused the government of not having mentioned the installation of the smart terminal back in 2019, when authorities carried out a public consultation process for the new taxi law.
The group thinks that the charge should not be imposed on the taxi drivers.
In order to install the smart terminal, taxi drivers’ old taxi meters had to be removed from the vehicles. The old meters cost 4,000 patacas.
“Our old meters were still working. Why did [the government] dismantle the old meters? We could still be using them,” said one of the petitioners.
The group was able to collect signatures from a total of 1,005 taxi drivers, some of whom are also taxi owners.
They mostly accused the government of not having sought taxi drivers’ opinions regarding the smart terminal fees. They demand that the government consult the drivers during the next round of public tender for the installation of the devices.
The group of taxi drivers made it clear that they “support the government making rules regulating taxi operations” but they hope they can also receive fairer treatment regarding issues such as the smart terminal maintenance fee.
Speaking to the Times, lawmaker Agnes Lam lent her support to the group’s opinion.
“I think that in pushing this [smart terminal fee] forward, one of the government’s major flaws was not having consulted the taxi drivers. They were not aware that they had to pay this amount of money until the service proposal was awarded to the company. If the government wants somebody to pay for some service, the government needs to let those people know,” said Lam.
“The lack of consultation and communication are very bad examples of public service this time. This is very unfair for them,” the lawmaker remarked.