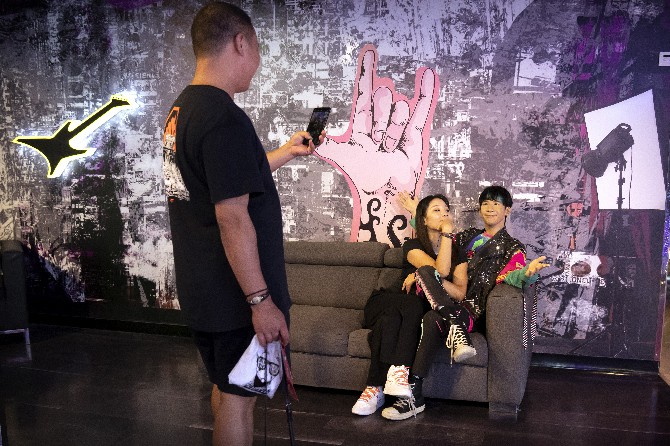 Hugely popular online games and celebrity culture in China are the latest targets in the ruling Communist Party’s campaign to encourage the public to fall in line with its vision for a powerful, more wholesome country.
The message? Play less, study and work more.
Rules that take effect today cut the amount of game time children are allowed by more than two-thirds to three hours a week. That coincides with a campaign to curb what the party sees as unhealthy attention to celebrities online.
“Adolescents are the future of the motherland,” the Press and Publications Administration said in a statement Monday accompanying the game rules.
The measures add to a drumbeat of initiatives under President Xi Jinping over the past half-decade that are aimed at prodding the public and companies to align with the party’s political and economic goals.
“This appears to be part of China’s push to ensure that the government is front and center in all aspects of its citizens’ lives,” said Paul Haswell, who heads law firm Pinsent Masons’ technology, media and communications practice for the Asia-Pacific region.
Xi has called for a “ national rejuvenation “ to restore China to its rightful place as a global leader with the ruling party directing areas from economics and technology to culture, education, religion and society.
“The party is the leader of everything,” says a document on “Xi Jinping Theory in the New Era of Chinese Socialism” issued in 2018.
The party is rolling out a system known as Social Credit to track every individual and company in China and punish missteps ranging from dealing with business partners that break environmental rules to littering.
Beijing launched a barrage of anti-monopoly, data security and other enforcements beginning in late 2020. It aims to tighten control over internet giants including games and social media service Tencent Holding Ltd., e-commerce service Alibaba Group and ride-hailing service Didi Global Inc.
Online gaming is seen by regulators as a political danger because users can socialize while they play, and it is harder than other activities to monitor or control, said Haswell. That adds to the risk users might organize and express dissent.
An official panel was created in 2018 to review “ethical issues,” or make sure games conform to party positions on human rights, foreign relations and other issues.
Monday’s announcement made clear Beijing’s concern focuses on the ability of young Chinese to contribute to the economy.
“Protecting the physical and mental health of minors is related to the vital interests of the broad masses of the people and the cultivation of newcomers in the era of national rejuvenation,” the publications agency said.
That reflects official unease about the need to ensure China has enough skilled future workers at a time when the workforce has shrunk over the past decade and is forecast to fall further.
Xi’s government appears to think China spends too much time and energy on entertainment and consumer services instead of manufacturing and high-tech industry Beijing regards as a strategic priority.
Under party pressure, Tencent, Alibaba and others have promised to spend billions of dollars on its priorities of developing processor chips, robots and other technology instead of on their core businesses.
On Saturday, microblog platform Weibo Corp. suspended thousands of accounts for fan clubs and entertainment news.
Platforms also have been barred from publishing lists of celebrities ranked by popularity.
A popular actress, Zhao Wei, has disappeared from streaming platforms without explanation. Her name has been removed from credits of movies and TV programs.
Another actress, Zheng Shuang, was fined 299 million yuan ($46 million) on tax evasion charges in a warning to celebrities to be positive role models for society.
The crackdown has been financially devastating to games operators including Tencent. Investor anxiety about the potential revenue loss has knocked more than $300 billion off Tencent’s stock market value and billions off those of smaller rivals.
“The irony is that China is home to a growing number of extremely talented game developers,” said Haswell.
An official newspaper lambasted online games in early August as “spiritual opium,” an explosive accusation in a system that associates nineteenth-century opium use with colonial powers seizing Chinese territory.
In 2018, Beijing froze new game approvals, citing concern children’s eyesight might suffer. News reports at the time said propaganda officials had taken over a leading role in regulation.
Game developers already were required to submit their latest titles for official approval before they could be released. Regulators also have called on developers to add nationalistic themes.
In 2019, game users under 18 were banned from playing between 10 p.m. and 8 a.m.
Ahead of the new rules, Tencent, also known for its WeChat message service, had already reduced the time children could play popular games to one hour per day, down from 90 minutes. It installed measures including facial recognition to confirm other users were adults.
Businesspeople and economists warn the party might hurt the economy by suppressing thriving games, entertainment and other online industries that has generated jobs and wealth.
So far, that is a price the ruling party appears to be willing to force China to pay. JOE McDONALD & ZEN SOO, BEIJING, MDT/AP