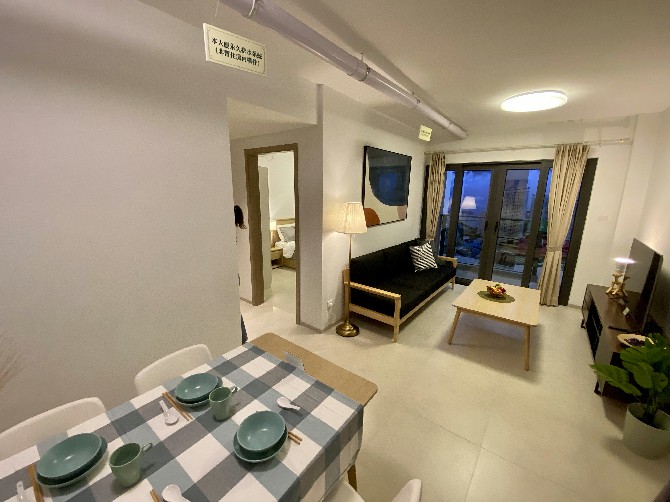 The 2,803 temporary housing units to be built at Lot P of Areia Preta will follow design and construction standards from the private sector market, Macau Urban Renewal Limited (MUR) Senior Project Manager, Jacky Ng told the Times.
“The [temporary housing] apartments’ design is functionality-based because we believe that people may be using them for two or three years when their houses are undergoing renovation, and that is why our design and construction are all based on standards in the private sector,” Ng said in an interview on the sidelines of a media tour of the mockup apartments’ exhibition. The exhibition opened to the public yesterday.
According to the same official, the rental price for the units will be formulated according to the urban renewal law and will take the rental prices of similar housing units in the area into account.
“At the moment, we are collecting opinions on how to formulate the rental prices but we will take into account factors such as the similarity in quality and area, as established by the government guidelines,” he said. He added, “Before we have completed the whole project, we will conduct an in-depth consideration of the rental price.”
According to MUR, the whole project is expected to be completed by the end of 2024, comprising eight housing buildings that are 37 to 50-stories high.
According to the on-site explanation of the project, it will also feature several recreational and leisure facilities, including outdoor recreational and sports areas, children’s playgrounds, promenades, and a green area that accounts for over 50% of the buildings’ podium areas.
Additionally, around 1,100 parking spaces for cars and about 590 spaces for motorcycles will be created. Parking spaces for the apartment units will be available for rent only and cannot be purchased.
Ng also clarified that the apartment units to be provided through temporary housing and home swap housing under the Urban Renewal Scheme to property owners affected by urban renewal will be equipped with basic appliances, including kitchen appliances such as a fridge, a cooking stove and water heater. Ng also said that the buildings will be powered with electricity and also be equipped with aa centralized gas system.
Although the exhibition hall only features two types of apartment units (1-bedroom and 2-bedroom apartments), Ng clarified that the completed development will also include studio apartments and 3-bedroom apartments.
“In this display, we have only 1-bedroom and 2-bedroom apartments, but we are going to have four types of units including studios and 3-bedroom apartments. We chose to display these [1- and 2-bedroom apartments] because they account for about 80% of our 2,803 units,” Ng explained.
Ng added that before letting out the apartments to tenants, the MUR “will make clear guidelines about what tenants can and cannot [change] in the unit.”
The exhibition hall is located on the third floor of Mong-Há Public Housing – Mong Tak Building, located at the Rua de Francisco de Xavier Pereira, and will be open for visitors from Tuesday to Sunday between 11 a.m. and 8 p.m.