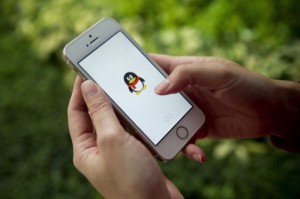 Tencent Holdings Ltd. posted a 59 percent surge in second-quarter profit as Asia’s biggest Internet company offered more games and shopping to the billion users of its WeChat and QQ messaging applications.
Net income rose to 5.84 billion yuan (USD949 million) in the three months ended June from 3.68 billion yuan a year earlier, the Hong Kong-listed company said in a statement yesterday.
Tencent is working with creators of the Candy Crush Saga and Final Fantasy titles as it competes with Alibaba and Baidu for the attention of China’s 632 million Internet users. The push for more entertainment content comes as the Chinese government tightens regulations on the dissemination of news through instant-messaging apps.
“The revenue from mobile games really exceeds market expectations,” said You Na, an analyst at ICBC International Research Ltd. in Hong Kong. “The company has come across strong on all the important indicators.”
Revenue rose 37 percent to 19.7 billion yuan as WeChat and the Mobile QQ service added a combined 321 million monthly active users – more than the entire population of the U.S. Online game revenue increased 46 percent from the previous quarter to 11.1 billion yuan. Online advertising sales jumped 59 percent on revenue from video advertising and the impact of the soccer World Cup.
Shares of Tencent were little changed, closing at HK$133.20 yesterday in Hong Kong. The stock has gained 35 percent this year, compared with a 6.8 percent advance in the city’s benchmark Hang Seng Index.
The size of the online gaming market is projected to grow to 225 billion yuan by 2017, according to Shanghai-based Internet consultant IResearch.
“With our understanding of PC games, we are in the right position to bring entertaining content to mobile users,” Wang Bo, vice president of Tencent Games, said in an e-mail in July.
Tencent’s Timi Studio has offered a number of popular titles such as Timi Run Everyday and Timi Match Everyday, securing Tencent’s position as the leader in mobile games in China, Wang said. Mobile game revenue increased to 3 billion yuan, helped by in-game promotions, the company said. Tencent was ranked first in Apple Inc.’s China App Store by revenue and free downloads from January through July, according to the statement.
WeChat, known as Weixin in Chinese, may be worth as much as $64 billion given the potential for the service to be monetized, Elinor Leung, an analyst at CLSA Ltd., said in a March 10 report.
WeChat and QQ face a harsher regulatory environment after the official Xinhua News Agency said China’s government issued rules restricting the dissemination of certain types of news, including political, through instant-messaging apps to authorized media outlets.
Rules tightening management of the apps are meant to safeguard national security, according to the Aug. 7 report. App providers also will be required to implement more stringent rules on real-name registration for users, the state-run agency said.
Competition among Internet companies is intensifying as Alibaba started the process in March for a U.S. IPO. Chinese Internet companies led by Alibaba and Tencent have announced 149 acquisitions and investments with a value of about $17 billion since 2012, according to data compiled by Bloomberg.
Tencent is trying to fend off Alibaba by adding more services through acquisitions.
Tencent agreed to buy 19.9 percent of Craigslist-like 58.com in June, following a 20 percent stake purchase in February of Dianping.com, a Yelp Inc.-like website in China that offers user reviews of restaurants.
Tencent folded its own e-commerce assets into JD.com after acquiring a 15 percent stake in the competitor of Alibaba in March and has been directing traffic from its chat services to generate more business.
A new single-click link to JD.com in the Chinese version of WeChat has produced an eightfold increase in daily transaction volumes, compared with the previous two clicks, JD.com said in June. Tencent also provided similar access to users of its Mobile QQ instant messenger.
“Our e-commerce transaction business has entered a transitional phase subsequent to our strategic transaction with JD.com,” the company said in yesterday’s statement. “We expect the e-commerce segment’s revenues and costs to decline further as we continue shifting focus toward supporting our strategic partnership.”
Tencent also is exploring other e-commerce opportunities. In May, it introduced an in-app function for holders of public accounts of WeChat to upload photos of merchandise, manage orders and communicate with customers, according to its website. Shoppers at some WeChat stores can make purchases with Weixin Payment, Tencent’s third-
party payment system.
In July, Tencent won approval from China’s banking regulator to jointly set up a lender as the government eases restrictions on the state-controlled banking industry.Bloomberg