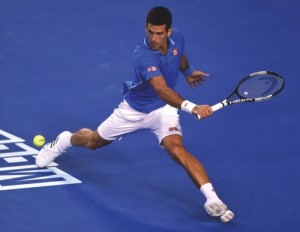 Novak Djokovic beat Andy Murray in the Australian Open final to move within one title of the men’s record six championships at the season-­opening tennis event.
The top-ranked Serb defeated Britain’s Murray, 7-6 (7-5), 6-7 (4-7), 6-3, 6-0 at Rod Laver Arena in Melbourne. He’s now one shy of Roy Emerson, the holder of a men’s record six Australian championships.
Djokovic’s eighth major victory ties him with Andre Agassi, Jimmy Connors, Ivan Lendl, Fred Perry and Ken Rosewall. The only Grand Slam that remains missing on Djokovic’s resume is the French Open.
Murray has now lost four Australian Open finals, three to Djokovic and one to Roger Federer. Djokovic has 16 wins in 24 meetings with the sixth-seeded Murray. The 27-year-olds are a week apart in age, and their rivalry dates back to their junior days. They first played at an event in France where they were 11, with Murray winning.
Murray will move to No. 4 in the rankings of the ATP World Tour tomorrow, while Djokovic keeps his hold on the post of the world’s best male tennis player. With Federer at No. 2 and Rafael Nadal at No. 3 when the rankings are published tomorrow, that means the men dubbed the “Big Four” are back at the top of rankings.
With Stan Wawrinka of Switzerland winning in Australia last year, and Croatia’s Marin Cilic taking the U.S. Open title, a changing of the guard at the top of men’s tennis had seemed imminent.
The victory in Australia is Djokovic’s second major title under the guidance of three-time Wimbledon champion Boris Becker. Djokovic also won Wimbledon, edging Federer. Danielle Rossingh, Bloomberg

Serena Williams battled through illness to beat Maria Sharapova in the finals of the Australian Open to win her 19th major singles tennis title. Williams, struggling with a virus, defeated Sharapova, 6-3, 7-6 (7-5) at Rod Laver Arena in the first women’s final between the No. 1 and No. 2 seeds in Melbourne since 2004. It’s her sixth title at the season’s opening Grand Slam. “Growing up, I wasn’t the richest but I had a rich family in spirit and support,” Williams told the crowd after she received her sixth Australian Open trophy from former winner Martina Navratilova.