Tennis | Murray on verge of completing remarkable return at Queen’s 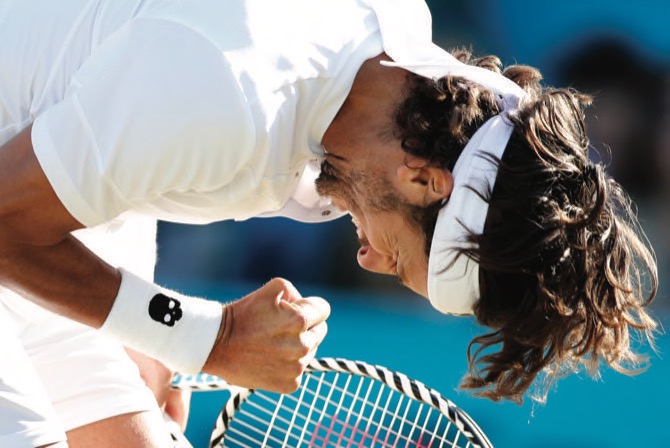 Andy Murray is on the verge of completing a remarkable return after hip surgery.

The three-time Grand Slam champion and Feliciano Lopez completed a busy Saturday at the Queen’s Club by defeating the third-seeded Henri Kontinen of Finland and John Peers of Australia 7-5, 6-7 (5), 10-7 to book their place in the doubles final.

Murray and Lopez had only just completed their 6-4, 7-6 (3) quarterfinal win over British duo Daniel Evans and Ken Skupski after that had been delayed by darkness the night before. Murray and Lopez were leading 6-4, 4-5 when play was suspended on Friday.

Lopez played three matches on Saturday, starting by booking his place in the singles final with a hard-fought win over Canadian teenager Felix Auger-Aliassime over three sets.

Lopez and Murray will play Rajeev Ram and Joe Salisbury in the doubles final, when Murray can complete a noteworthy week 146 days after undergoing what he hoped was career-saving hip surgery. In January he had said he was planning to retire after Wimbledon because of the severe pain he felt on a daily basis.

But talk of retirement is shelved as Murray seeks his first doubles title since 2011 when he won with his brother Jamie Murray in Tokyo.

Lopez will play Gilles Simon in the singles final first, when the Spanish veteran will become the tournament’s oldest finalist.

The 37-year-old Lopez rallied to beat the 18-year-old Auger- Aliassime 6-7 (3), 6-3, 6-4 in a semifinal that saw the biggest age differential in an ATP semifinal or final since the 43-year-
old Ken Rosewall defeated 23-year-old American Pat Dupre to reach the Hong Kong Grand Prix final in 1977.

Lopez saved all eight break points he faced and converted two of his own to beat Auger- Aliassime in 2 hours, 16 minutes and advance to his first final since 2017, when he defeated Marin Cilic here. Then 35, he became the tournament’s oldest champion.

Auger-Aliassime hit 25 aces compared to the Spaniard’s 15 and will have to wait before cracking the top 20 in the rankings. A win would have been enough for the Canadian, who is a career-high No. 21.

Lopez has won five of their seven meetings and all four of their matches on grass. AP