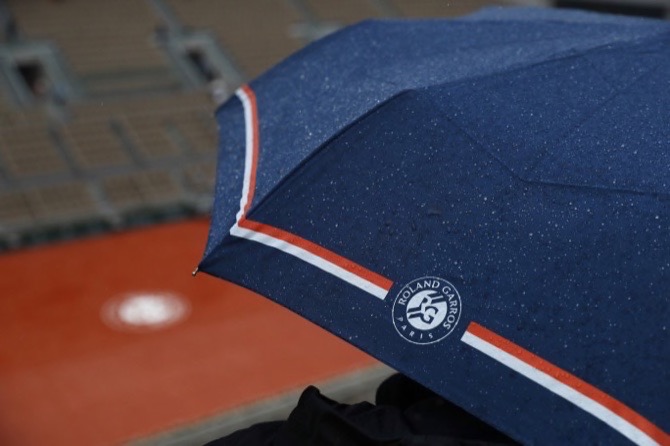 A steady rain delayed the start of play in the last two French Open women’s quarterfinals for at least two hours yesterday.

The winners of those two matches would, in theory, play each other in the semifinals today, but that could change if they are unable to get the quarterfinals done earlier.

The other women’s semifinal is set: No. 26 Johanna Konta of Britain vs. unseeded 19-year-old Marketa Vondrousova of the Czech Republic.

The temperature was below 60 degrees F (15 degrees C) and the forecast predicted showers all day. Roland Garros is the only Grand Slam site without a covered court; a retractable roof is expected to be added to the main stadium before next year’s tournament.

It’s all a bit of bad news for the players who had yet to play their quarterfinals.

On the men’s side, that includes No. 1 Novak Djokovic, who is attempting to win a fourth consecutive Grand Slam title. His match against No. 5 Alexander Zverev was scheduled to follow Halep-Anisimova in the tournament’s main stadium.

The other remaining singles match, No. 4 Dominic Thiem vs. No. 10 Karen Khachanov, was to come after Barty-Keys.

The winners of those men’s quarterfinals will square off in the semifinals, which are planned for Friday. The other semifinal will be between Roger Federer and Rafael Nadal, who advanced with victories Tuesday.

Anisimova is the first tennis player born in the 2000s to reach the round of eight at any major tournament. AP