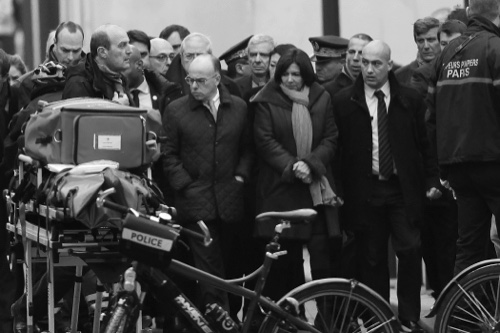 Masked gunmen shouting “Allahu akbar!” stormed the Paris offices of a satirical newspaper yesterday, killing 12 people before escaping. It was France’s deadliest terror attack in at least two decades.
French President Francois Hollande called the attack on the Charlie Hebdo weekly, which has frequently drawn condemnation from Muslims, “a terrorist attack without a doubt” and said several other attacks have been thwarted in France “in recent weeks.”
France raised its security alert to the highest level and reinforced security at houses of worship, stores, media offices and transportation. Top government officials were holding an emergency meeting and Hollande planned a nationally televised address in the evening.
A witness who works nearby, Benoit Bringer, told the iTele network he saw multiple masked men armed with automatic weapons at the newspaper’s office in central Paris. The attackers went to the second floor and started firing indiscriminately in the newsroom, said Christophe DeLoire of Reporters Without Borders.
“This is the darkest day of the history of the French press,” he said.
Luc Poignant, an official of the SBP police union, said the attackers left in a waiting car and later switched to another vehicle that had been stolen.
Paris prosecutor’s spokeswoman Agnes Thibault-Lecuivre confirmed that 12 people were killed in the attack.
Video images on the website of public broadcaster France Televisions showed two gunmen in black at a crossroads who appeared to fire down one of the streets. A cry of “Allahu akbar!” — Arabic for “God is great”— could be heard among the gunshots.
The extremist Islamic State group has threatened to attack France and minutes before the attack Charlie Hebdo had tweeted a satirical cartoon of that extremist group’s leader giving New Year’s wishes. The cartoon entitled “Still No Attacks in France” had a caricature of an extremist fighter saying “Just wait — we have until the end of January to present our New Year’s wishes.”
Yesterday’s attack comes the same day of the release of a book by a celebrated French novelist depicting France’s election of its first Muslim president. Hollande had been due to meet with the country’s top religious officials later in the day.
The satirical weekly has a history of drawing outrage across the Muslim world with crude cartoons of Islam’s holiest figure. The magazine’s offices were firebombed in November 2011 after it published a spoof issue that “invited” Muhammad to be its guest editor and put his caricature on the cover.
A year later, the magazine published more Muhammad drawings amid an uproar over an anti-Muslim film. The cartoons depicted Muhammad naked and in demeaning or pornographic poses. As passions raged, the French government defended free speech even as it rebuked Charlie Hebdo for fanning tensions.
The small-circulation weekly leans toward the left and takes pride in making acerbic commentary on world affairs through cartoons and spoof reports.
“We treat the news like journalists. Some use cameras, some use computers. For us, it’s a paper and pencil,” the Muhammad cartoonist, who goes by the name Luz, told The Associated Press in 2012. “A pencil is not a weapon. It’s just a means of expression.”
Chief editor Stephane Charbonnier, who publishes under the pen name “Charb,” has also defended the Muhammad cartoons.
“Muhammad isn’t sacred to me,” he told The AP in 2012. “I don’t blame Muslims for not laughing at our drawings. I live under French law. I don’t live under Quranic law.”
Islam is not alone in being singled out by Charlie Hebdo’s satire. Past covers include retired Pope Benedict XVI in amorous embrace with a Vatican guard; former French President Nicolas Sarkozy looking like a sick vampire; and an Orthodox Jew kissing a Nazi soldier.
The magazine occasionally publishes investigative journalism, taking aim at France’s high and mighty.
Charlie Hebdo has come under pressure ever since its 2011 Muhammad issue. Its website has been hacked, and Charbonnier has needed police protection. Riot police guarded the magazine’s offices after the 2012 issue hit the stands. Jamey Keaten & Lori Hinnant, Paris, MDT/AP

obama: us stands with french in time of suffering

President Barack Obama’s top spokesman says the United States is determined to help the French apprehend those responsible for the attack on a satirical Paris newspaper.
Press secretary Josh Earnest says U.S. officials have been in close contact with the French after the bloody attack yesterday on the Charlie Hebdo weekly.
Earnest tells CNN the French have been “stalwart allies” in the U.S. fight against Islamic State extremists. The spokesman also says, “We know they are not going to be cowed by this terrible act.”
Earnest also says Washington will work hard to protect Americans at home and abroad.
He says, “We obviously are trying to monitor what we consider to be a very important threat, which is the threat of foreign fighters.”