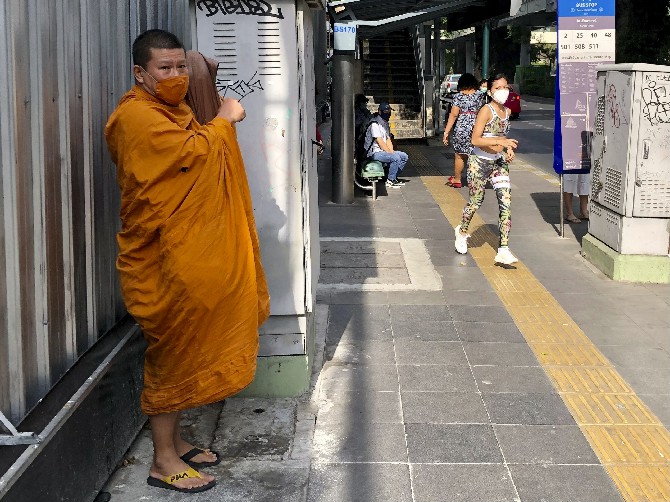 Officials in the Thai capital have announced new restrictions, including the closure of some entertainment facilities during the New Year’s holiday, as infections continued to rise following a recent coronavirus outbreak.
After months of seeming to have the COVID-19 situation under control, Thailand has seen two major clusters developing since mid-December that threatened to undo its progress. One has mainly infected hundreds of migrant workers from Myanmar at a seafood market near Bangkok, the capital, while in recent days a cluster has grown connected to a gambling den in an eastern province.
As part of the restrictions announced Monday, hostess bars, gambling venues and massage parlors in Bangkok were ordered by the city government to close from yesterday until Jan. 4. Bars and restaurants will be allowed to remain open during this period, but must close at midnight and adhere to social distancing requirements.
Thailand reported 155 new coronavirus infections yesterday morning. Of those, 134 were local transmissions, 11 were migrant workers and 10 were from state quarantine, according to the government’s COVID-19 coordinating center.
Meanwhile, the latest COVID-19 death in nearly two months in Thailand was confirmed on Monday. The victim was a 45-year-old parking attendant at an illegal gambling den in Rayong province, on Thailand’s eastern seaboard. Rayong Gov. Channa Ieamsang confirmed at least 148 active cases linked to the gambling den in the afternoon.
The man who died had chronic heart disease and diabetes and his coronavirus test came back positive on Sunday, according to Deputy Public Health Minister Satit Pitutecha, On Monday morning, he became tired and gasped for air before he stopped breathing on the way to a hospital.
In response to the outbreak in Rayong, officials have announced a widespread shutdown, including schools, bars and other entertainment venues, massage and beauty parlors and department stores. Restaurants in the province will be allowed to operate for takeaway only.
The early closing times for bars and restaurants in Bangkok means that New Year’s celebrations are likely to be strongly muted. Some popular midnight-countdown venues, including in the city’s central shopping district and along the riverside, had already canceled live concerts and other activities, but some fireworks displays are scheduled to go ahead as planned.
“During the New Year’s holiday we won’t impose travel restrictions, but there will be measures put in place in many provinces,” said Prime Minister Prayuth Chan-ocha, who visited Rayong yesterday to discuss the situation there.
Kiattiphum Wongrajit, permanent-secretary of the Public Health Ministry, said the government would impose checkpoints at entry and exit points to some provinces seeking to prevent further spread of the virus. He also said migrant workers would not be allowed to travel outside of their residential and work areas.
Thailand generally has been viewed as successful in combating the coronavirus, due partly to its well-regarded public health infrastructure and people’s adherence to mask-wearing and other protocols.
But cases have jumped significantly since an outbreak was detected last week among migrants from Myanmar working at a seafood market in Samut Sakhon province. Millions of low-wage jobs in Thailand are filled by workers from less affluent neighboring countries, especially Myanmar.
Samut Sakhon Gov. Weerasak Wijitsaengsri tested positive for the virus after meeting Sunday with senior health officials including Deputy Prime Minister and Public Health Minister Anutin Charnvirakul.
More than 20% of Thailand’s total of 6,440 confirmed cases are migrant workers in Samut Sakhon, and cases connected to the cluster have been found in 44 other provinces.
Samut Sakhon was put under lockdown on Dec. 19, followed by Samut Songkhram and Samut Prakarn.
A government spokesperson warned that the number of new daily coronavirus cases could rise to more than 10,000 in January under a worst-case scenario if the government does not do enough now.
If authorities impose moderate intervention measures, the number of daily infections could rise to around 8,000 by the end of January, while under the strictest measures the number would likely not exceed 1,000, according to the spokesperson, Dr. Taweesilp Visanuyotin of the COVID-19 coordinating center. AP