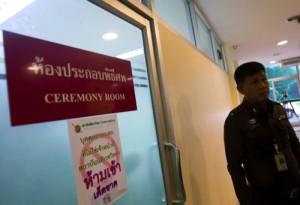 Police in Thailand said yesterday they have conducted autopsies on two British tourists whose bludgeoned bodies were found on a scenic resort island this week.
DNA samples have also been collected from several people who were among those in the area where the killings occurred on Koh Tao, said Maj. Gen. Pornchai Suteerakune, the country’s forensics police chief.
Authorities have made no arrests so far but are hoping to match the samples with DNA evidence collected from the corpses.
Pornchai told reporters in Bangkok that autopsies showed 23-year-old Hannah Witheridge had died from head wounds while 24-year-old David Miller had suffered severe blows to the head and drowned in the surf.
Pornchai said Miller also had wounds on his hand, indicating a struggle had taken place.
The two Britons were found Monday morning in a rocky alcove along the shore close to the hotel where they were both staying.
Koh Tao is a popular diving destination in the Gulf of Thailand, and the brutal deaths were a blow to the country’s tourism industry, which has struggled in the wake of six months of political protests that culminated in a military coup in May.
More than 70 police officers have been deployed to the island to investigate the case. AP