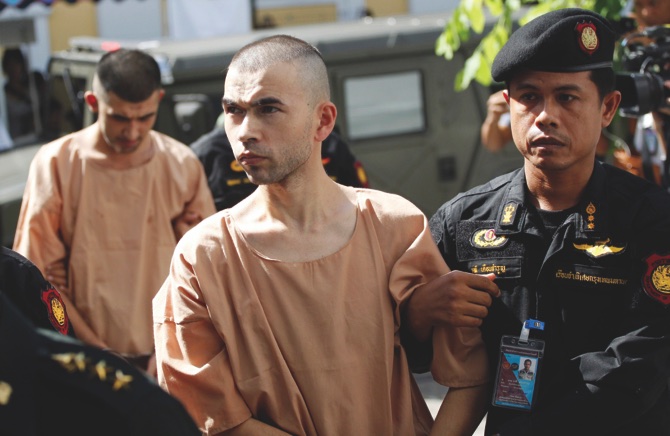 Police officers escort suspects in the Aug. 17 blast at Erawan Shrine, Bilal Mohammad (front), and Mieraili Yusufu (rear), as they arrive at a military court in Bangkok

Testimony began yesterday in the trial of two men accused of carrying out a bombing at a Bangkok landmark last year that killed 20 people, after a dispute over the defendants’ translators had delayed the proceedings.

Mieraili Yusufu and Bilal Mohammad, Chinese nationals from the Muslim Uighur minority, have pleaded not guilty in the Aug. 17, 2015, bombing of the Erawan shrine, which is popular among Chinese and other tourists. Fourteen of the dead were tourists, and many Chinese were among the 120 people injured.

The first witness, a police officer, began testifying after the court overruled defense objections that two translators provided by the Chinese Embassy might be prejudiced against the defendants. The defense argued that China does not respect Uighurs (pronounced WEE-gurs), but the court said there was no evidence that the translators would be biased.

Three observers from the Chinese Embassy attended the trial, which is being held in a military court. Since a May 2014 army coup toppled Thailand’s government, military courts have handled criminal cases deemed to involve national security.

The charges against the defendants include conspiracy to explode bombs and commit premeditated murder.

“I saw many people with serious injuries and many dead. The shrine itself was damaged,” testified Lt. Col. Somkiat Ploytubtim, who was part of the police investigation team.

Thai authorities say a people-smuggling gang whose activities were disrupted by a crackdown carried out the bombing as revenge. However, some analysts suspected it might have been the work of Uighur separatists angry that in July 2015, Thailand forcibly repatriated scores of Uighurs to China, where they may be persecuted.

The start of the trial had been aborted several times, largely because of a failure to find capable translators.

The court said it would accept the defense attorney’s letter of objection and consider it separately, but noted that the defendants failed to object earlier when the court notified them of their intention to contact the Chinese Embassy for a translator. It characterized their objections yesterday as an effort to stall the proceedings.

The defendants are the only two suspects in custody out of the 17 people that authorities say were responsible for the bombing, one of the deadliest acts of violence in Bangkok in decades. Some of the 15 other suspects are Turks, with whom Uighurs share ethnic bonds. Beijing charges that some Uighurs are Islamist terrorists and that some have been smuggled out of China to join Islamic State fighters in Syria via Turkey.

Police say the case against the two men is supported by closed-circuit television footage, witnesses, DNA matching and physical evidence, in addition to their confessions. Police believe Yusufu detonated the bomb minutes after a backpack containing the device was left at the shrine by Bilal, also known as Adem Karadag.

However, the two defendants have said they were tortured in custody to confess, a charge rejected by the court. Natnicha Chuwiruch & Tassanee Vejpongsa, Bangkok, AP