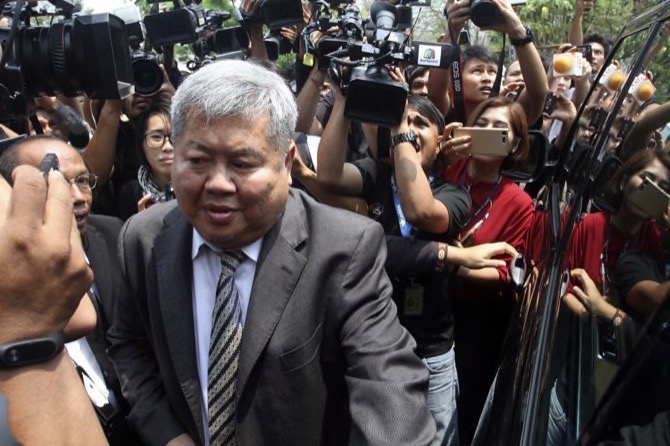 A Thai construction tycoon was convicted yesterday on charges related to a high-profile poaching case last year but was found not guilty of possessing the carcass of an endangered black panther seen in photos that had sparked a public outcry.

The Thong Pha Phum Provincial Court sentenced Premchai Karnasuta, the president of Italian- Thai Development PLC, to 16 months in prison for possessing the carcass of a protected Kalij pheasant, possessing firearms in public areas, and supporting others to hunt in a protected wildlife sanctuary.

Premchai was arrested last February after park rangers found that he and three of his company’s employees had set up camp at the Thung Yai Naresuan Wildlife Sanctuary, where they were found with guns and the carcasses of a panther and other animals.

Only the three other men were found guilty of possessing the panther carcass. Only one defendant was found guilty of hunting in the wildlife sanctuary, and he and Premchai were fined a USD63,132 fine.

Premchai’s case had been met with public skepticism that justice will be done in a country that has seen the rich and privileged prevail in high-profile cases. Wildlife activists concerned about the case have worn masks of the slain big cat as a symbol of protest on several occasions and graffiti artists had sprayed Bangkok’s walls with paintings of the black cat while environmentalists had pledged to keep up pressure.

Premchai was released on bail for a bond of $12,635 shortly after yesterday’s ruling while he appeals the case. The court also granted bail for two other defendants because they were not deemed flight risks.

Before Thailand’s general election is held this coming Sunday, some political parties have even used images of the black panther in their campaigning to vow for an improved justice system. AP