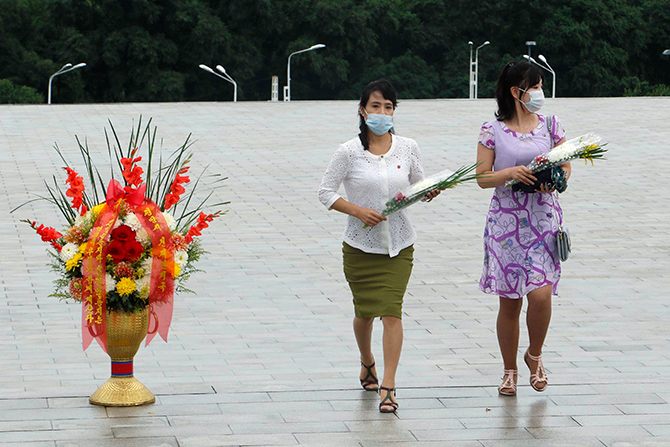 Women visit the statues of former North Korean leaders Kim Il Sung and Kim Jong Il in Pyongyang to lay flowers Monday, on the occasion of the 67th anniversary of the end of the Korean War

The U.N. human rights office reported yesterday that scores of North Korean women who had traveled abroad in a desperate search for work were abused by security officials and police through beatings, detention in unsanitary conditions, undernourishment and invasive body searches after being sent back home.

The United Nations Office of the High Commissioner for Human Rights presented the findings in a new report that alleges “multiple and serious human rights violations by state security and police officials” in North Korea, based on 100 accounts from women who were detained in the secretive country from 2009 to 2019 after being forcibly returned home.

Testimonies suggest the women, who often fell into the custody of human traffickers, faced bonded labor or sexual exploitation in other countries — then were deemed traitors or punished for contacting Christian groups abroad after their return.

“It is heartbreaking to read these stories of women who fled their country looking to make ends meet, but who ended up being punished,” High Commissioner Michelle Bachelet said in a statement accompanying the report. She said the women “should be taken care of, not detained and subjected to further human rights violations.”

“These women have a right to justice, truth and reparation,” she added.

North Korea’s diplomatic mission in Geneva did not immediately respond to a request for comment.

The U.N. rights office also called on foreign countries where the women fled — at times including neighboring China — to respect the principle of “non-refoulement,” or not returning people to countries where they could face a real risk of human rights violations.

“These accounts show once again the systemic nature of human rights violations in the DPRK, and the need to keep seeking pathways to proper accountability for such crimes,” Bachelet said, using the acronym for North Korea’s official name, the Democratic People’s Republic of Korea.

The report only focused on women who had fled abroad, not the many people held in political prisons in North Korea which are believed to also be a site of human rights violations. AP