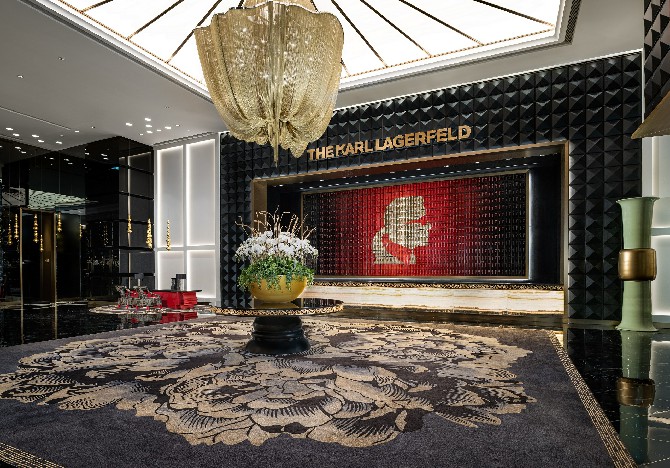 The Karl Lagerfeld at Grand Lisboa Palace officially opens today, with 271 rooms showcasing the designer’s style: from specially commissioned furniture to circular room dividers inspired by traditional Chinese moon gates.
The rooms and suites are divided into six categories, ranging in floor area from 60 square meters to 350.
The largest room is the Autograph suite, being the only one in the hotel with two bedrooms, a spacious living room, a dining room and a fully equipped kitchen among other unique features.
Entering the lobby, the visitor catches sight of a reception wall covered by over a thousand keys: a motif inspired by the movie The Grand Budapest Hotel, by Wes Anderson.
“The interior design of The Karl Lagerfeld [has a] unique and lavish blend of Chinese and Western aesthetics. […] We believe that our guests will be impressed by his iconic style that runs throughout the hotel tower,” Daisy Ho, chairman of the board of directors of SJM.
“SJM is proud to bring The Karl Lagerfeld to Macau, a testament to the luxury and uniqueness of the Grand Lisboa Palace, the first integrated resort to introduce a fashion hotel concept to our city’s hospitality scene.” She added.
This is the first time the late German fashion designer Karl Lagerfeld and his team designed an entire hotel, including its rooms, suites, and the Portuguese restaurant Mesa, which has been open since June.
“The Karl Lagerfeld is the first and only hotel tower in the world to be entirely designed by Karl […] top to bottom, start to finish,” said Pier Paolo Righi, CEO of Karl Lagerfeld. “[It was] a unique interior design project for Karl in China and a labor of love for over five years. He was able to complete the design before his passing — designing and approving each element of the hotel tower.”
Another dining option at the hotel is The Book Lounge at the lobby, inspired by Lagerfeld’s passion for books, and specifically the famous library at his mansion.
The Karl Lagerfeld Hotel in the 20-storey tower, brings the total rooms housed in the Grand Lisboa Palace to 1,892 across its three hotels: the Grand Lisboa Palace Macau Hotel, Karl Lagerfeld Hotel, and the (yet to open) Palazzo Versace, designed by Donatella Versace.