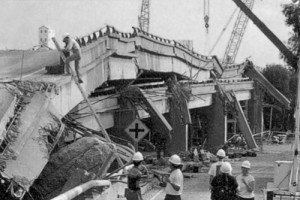 A powerful earthquake has rocked San Francisco killing nine people and injuring hundreds. The number of dead is expected to rise significantly. The two-tier Bay Bridge and Nimitz freeway both partially collapsed and rescuers are waiting to recover bodies from cars crushed by the quake.
The epicentre of the quake, which measured 6.9 on the Richter scale, is thought to have been Loma Prieta, 10 miles north of Santa Cruz on the San Andreas fault. A massive rescue effort is now underway in what experts believe is the second biggest earthquake ever to hit the United States.
Officials have reported “unbelievable damage to infrastructure” with collapsed bridges and freeways, fires, shattered buildings, gaping cracks in roads and land slides.
Tremors from the quake, which lasted 15 seconds, were reported 400 miles away in Los Angeles and 200 miles away in Reno, Nevada.
The quake struck at 1704 local time (18 October, 0004 GMT), as people were making their way home after work. Traffic was brought to a standstill and many homes left without power.
Fans waiting to see the baseball World Series match at Candlestick Park were also caught up in the quake. Supporters ran onto the pitch as the whole stadium swayed.
Hospitals have been flooded with injured victims. Ambulance worker Kimberly Kelly said: “We’re getting mainly shock, cuts and shortness of breath.”
Officials are said to be shocked at the amount of damage as freeways and buildings are supposed to be earthquake-proof.
The Governor of California, George Deukmajian, said: “I had been under the impression that the highways had been constructed to deal with any severe earthquake and I am very surprised to see what has happened to some of those.”
“I think we are going to have some kind of inquiry to determine why they did not survive a quake of the severity of this one.”

The final death toll of 63 was well below the 300 expected deaths. Over 3,500 people were injured and 100,000 buildings damaged. The reason for the lower-than-expected death toll was put down to the fact that most people had left work early to watch the third of the World Series baseball games which was being shown on television.
Over 12,000 people were made homeless by the earthquake. Some were eventually able to return to their homes following extensive repairs. Extensive structural damage meant others were given 15 minutes to collect their belongings before their houses were demolished.